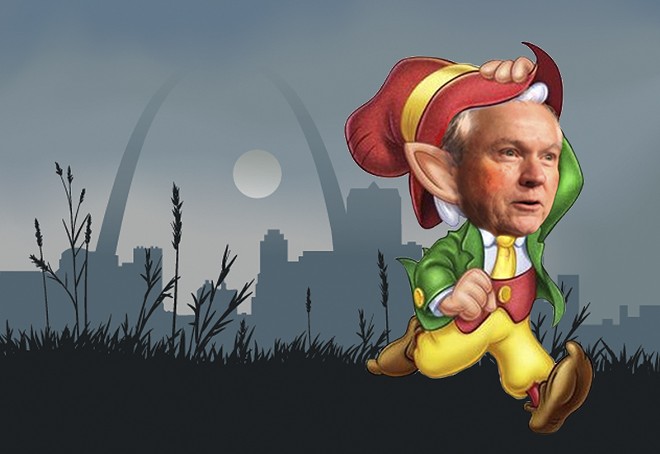 This morning, a 70-year-old kewpie doll who hates legal immigration and prison reform will visit Missouri to speak with law enforcement about how to "combat violent crime and restore public safety."

It's an interesting position for the wee li'l racist to be in, since a criminal complaint was recently filed against him by 23 American citizens who believe he's lied about his communications with the Russian government. Sessions denies that he's perjured himself, but he's had to recuse himself from the ongoing investigation of President Trump's ties to Russia after admitting speaking to a Russian ambassador on two occasions while working on the president's campaign in 2016.

But we digress. Unlike the KKK, violent crime is one thing Sessions is sure he hates. Yet he's spent the past three decades doing everything he can to perpetuate its cycle. When he served as U.S Attorney for the Southern District of Alabama, drug convictions made up 40 percent of his total convictions, a number double what the rest of the state's prosecutors achieved. He prefers long federal sentences for non-violent crime, and maximum sentencing for low-level drug offenses — exactly the kind of policies shown to be counter-productive in curbing crime and wreaking havoc on underprivileged communities.

You may not be surprised to learn Sessions loves civil asset forfeiture, which allows the government to seize the property of people who have not been convicted (or in some cases, even charged) with criminal activity. He's also not a fan of the Justice Department's recent oversight of police departments which engage in the long-term criminalization of its own citizens, particularly the poor and minorities.

All of that is merely preamble for the big question, however: Namely, how brave is it for a man who looks like a Keebler elf to get so close to Ferguson, which the administration he works for (wrongly) believes is one of the most dangerous cities in America? Perhaps the fact that DOJ oversight has been so effective at eliminating the predatory tendencies of the Ferguson PD has emboldened the dinky KKKracker?

Or perhaps he's just forgotten the official party line. That empty cuckoo clock on his shoulders doesn't seem capable of retaining much information. His confirmation hearings were proof of that.

Either way, the real victims today are the men and women of law enforcement, who will have to keep straight faces while a runaway ventriloquist dummy harangues them about "getting tough on crime" and "making America great again."

Here's a free tip, officers: Picture him in Klan robes while he's doing it. Not so funny now, is it?