Take It From Someone Who Isn't a Soccer Fan: Vote “Yes” on the MLS Stadium Measures 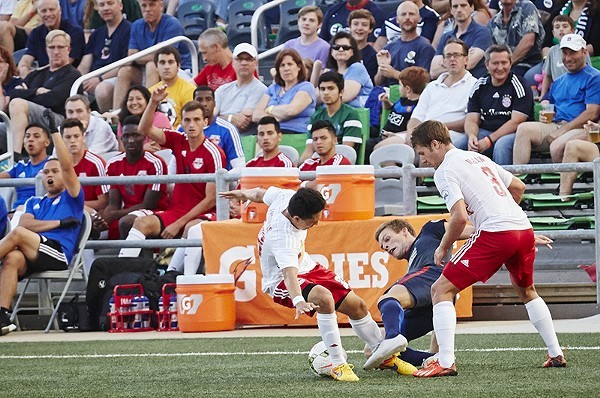 Close your eyes and imagine, for a moment, you live in some other city in America. You're miles away, probably on a coast where the seasons each last three months rather than three minutes. Now you turn on the news and see the tragic events taking place in Ferguson. After you consult your phone, you see that Ferguson is less than ten miles north of St. Louis. Not long after that story fades from the news cycle you hear about St. Louis again; this time the city is being bashed by Rams' owner Stan Kroenke. You know nothing of Kroenke and little of St. Louis. You don't know who to believe. Is St. Louis as bad as Kroenke says? Then the Rams leave for Los Angeles. Kroenke must have been right if he got his way, you think. It sounds to you as though St. Louis is a city that is dying.

OK, open your eyes. You can be yourself again: a proud St. Louis city resident. You're tired of the rhetoric being broadcast across the nation. You know St. Louis isn't dying! Perhaps it isn't flourishing, but it certainty isn't dying. You know the deck was stacked against us when it came to Kroenke and the Rams. You know many great city neighborhoods are thriving. You also know our city's boxing history is too rich for us to just throw in the towel when we're down on the mat.

Now, I will be the first to admit I am not a soccer fan. This isn't a pitch (pun intended) for soccer; it's a pitch for St. Louis. This is an opportunity for us as a city to stop the bleeding. MLS doesn't draw headlines quite like the NFL does, but it's something. It's a sign of urban growth in what many Americans have been led to believe is a dying city. It's a step in the right direction. It's a step we need to take together as a unified city.

See also: Take It from a Soccer Fan. Vote No on the MLS Stadium Measures

MLS is the most racially diverse league among the five major North American sports leagues. Former Cardinal great Ozzie Smith spoke recently after the Cardinals signed Dexter Fowler, the only African American player that will be on the team's Opening Day roster this year. "An organization has to start looking like its community," Ozzie said. "If it doesn't look like its community, then when you look at the ballpark you don't see the community. It's got to be more inclusive." The Cardinals and Blues are two predominantly white teams playing in a city that isn't predominantly white. If we can land an MLS franchise, soccer would be a different story.

I said before I'm not a soccer fan. I am, however, a Cardinals fan. You could go so far as to say I love the Cardinals. I attend between fifteen and twenty games each season, and they are the reason I will never move out of St. Louis. One of my favorite questions to ask someone I've just met is, “What is the happiest single moment of your entire life?” I get a lot of clichés about kids and marriage, but the answer I give people is different. The happiest moment of my life was when Adam Wainwright delivered strike three to Brandon Inge in 2006 to clinch the Cardinals' first World Series title of my lifetime.

That night, I was inside the stadium with my dad for the last out. The euphoria was real. I hugged a countless number of strangers. These were people I would never have a reason to even speak to in my day-to-day life, much less have any physical contact with them. And that is the power of sports. That is why, despite my lack of soccer fandom, I still want this team for St. Louis. I know there are St. Louisans who care for soccer as much as I care for baseball. I want them to have a moment like I did that chilly October night.

After all, that's what sports do best: They bring people together. Sports give people who have nothing in common something to talk about. Sports give people memories that last a lifetime. Sports can bring a city together. And isn't that what St. Louis needs most right now? Some common ground? We need something we can all root for.

Whatever happened, happened. Ferguson happened. The Rams departure happened. Those black eyes are on our city. Now it's up to us whether we fight back or stay down for the count. Other cities around the country are watching what we will do next. Will we give up? Will we throw in the towel or throw a right hook? I say we vote yes on Props 1 and 2. Let's rebuild St. Louis together.

Alan Koenig lives in the city's Southwest Gardens neighborhood. You can reach him by email at akoenig7889@gmail.com. The RFT welcome concise essays on topics of local interest. Contact sarah.fenske@riverfronttimes.com if you've got something to say.