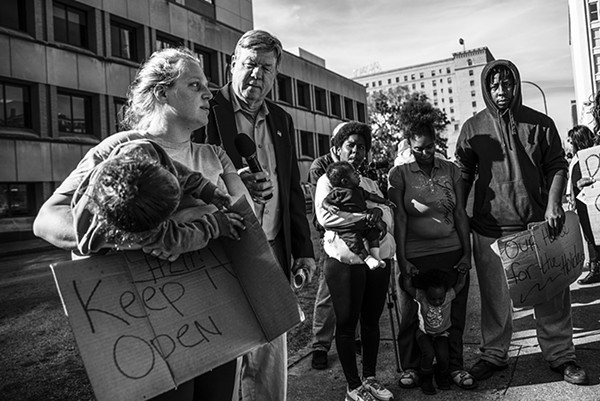 With St. Louis city officials poised to force the shutdown of Larry Rice's controversial homeless "shelter of last resort" downtown tomorrow, saying they have found alternative housing for its residents, a nonprofit law group is saying "not so fast."

Arch City Defenders, the local firm behind many successful lawsuits targeting municipalities, has filed both a motion for a temporary restraining order and class action lawsuit against the city in St. Louis Circuit Court, seeking to order the city not to follow through on its plans to move residents previously housed by Rice's shelter into a warehouse used by its Forestry Division.

The warehouse is "intended for forestry, gardening equipment, various city-owned motor vehicles" and "contains hazardous materials and chemicals and is not suitable for habitability by humans," the lawsuit argues. The suit was filed under the names of three homeless residents, but seeks to represent anyone who could be forced to rely on the city's accommodations.

A hearing has been scheduled today for 3:30 p.m. The lawyers are expected to argue that the population served by Rice's shelter is facing "immediate, irreparable harm" if forced to rely on the Forestry Division warehouse and need an expedited judicial process.

ArchCity filed the suit in conjunction with the legal clinic at Saint Louis University. The attorneys visited the site yesterday and worked through the night to prepare the legal actions in response, a spokeswoman said.

Rice had sought to keep the New Life Evangelical Center open, but after losing an appeal earlier this week, announced that he would comply with the city's order.

The city has long sought to shut down the shelter, which serves approximately 200 people each night. Rice has been without an occupancy permit since May 2015. But he argues that he handles a difficult population that no other city shelter is equipped to handle. And if the attorneys at ArchCity and the SLU Law Clinic can persuade a judge that the city's plan for those people is untenable, it could well be enough to grant Rice one more reprieve.

Update: The judge has said he wants to hear more. An evidentiary hearing is scheduled for April 1.