Nope, it's not just your imagination, and it's not just the jizz-smelling pear trees in your particular yard. Spring sprung in St. Louis significantly earlier than it does generally — and that was even, and also, true for areas much further north than us.

The details are documented on new maps released this week by the USA National Phenology Network, an effort guided by staffers of the U.S. Geological Survey and the University of Arizona aimed at "taking the pulse of our planet."

The network's maps show that St. Louis is part of a broad swath of the southern and central U.S. west of the Rockies, in which spring leaves arrived a full twenty days earlier than usual. See the interactive map at the top of the post to watch spring make its way north — by the network's calculation, it arrived in St. Louis by February 27 this year.

(Interestingly, the Pacific northwest is actually suffering a delayed spring, as are parts of Arizona and Southern California. See the still map below for a closer look at some of those spots where blue replaces red, indicating those poor schmoes out West are as many as fifteen days behind.)

But in the lower Midwest, the heat wave was very real. In fact, while the network previously pointed to 2012 as a record-setting early spring, 2017 had that handily beat.

As the map below shows, spring leaves arrived in St. Louis a full one to two weeks earlier than the previous early point — as anyone who noticed flowering (and May flowers) in mid-February could surely attest.

So yeah ... it's getting hot in herre. We're sure August is going to be tons of fun. 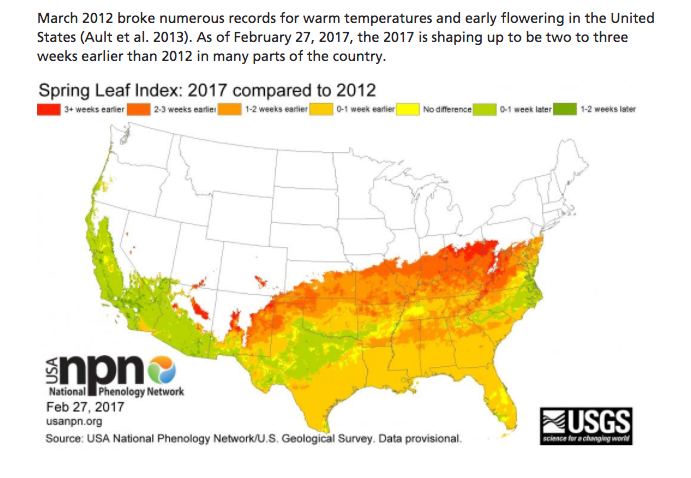