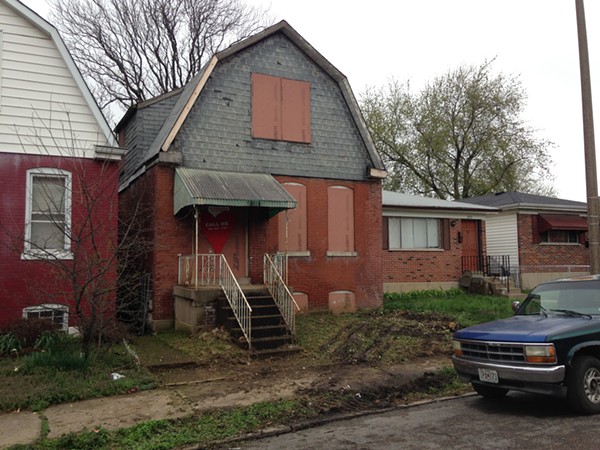 An empty, beaten-up house in Gravois Park is the site of an experiment.

The city scrapped plans to level the two-story vacant home and instead used the money that would have gone toward demolition to tuckpoint the brick and repair the roof — just enough work to stabilize the single-family home and put it on the market.

"The idea is this would turn a liability into an asset and something that would generate interest in our neighborhood," Alderwoman Cara Spencer says.

The house is one of thousands owned by St. Louis' Land Reutilization Authority, or LRA. The buildings are ones that nobody wanted, leftovers from tax auctions and often long-abandoned. The sheer volume of them makes even basic maintenance, such as keeping the grass mowed, a massive burden that city officials have for years struggled to unload.

One of the latest ideas to chip away at the problem will be on the April 4 ballot as Prop NS, a measure that would issue as much as $6 million in bonds each year to shore up foundations and patch roofs in an attempt at "laying the ground work for home buyers and small rehabbers to invest in vacant buildings," supporters say. It would be funded by a one-cent property tax increase.

The project in Gravois Park has similar goals, but the plans are funded differently and began before Prop NS existed, Spencer says. It's also on a much smaller scale; the plans that allowed for its rehab will potentially target just one building a year, while Prop NS is designed to stabilize hundreds of properties annually. If it passes and Spencer's model becomes obsolete, she's fine with that.

In the meantime, the alderwoman hopes to continue with plans set in motion last year when she began talking to Building Commissioner Frank Oswald about diverting a sliver of the city's $1 million demolition budget toward stabilization. The decided to try it out on one house in Spencer's Ward 20.

They eventually settled on the old brick house on California Avenue. Two nearby houses — a blocky gray row house two doors down and a privately owned beater across the street — were demolished. But the house at 3735 California seemed like it could be saved, even it will require a gut rehab. It has an old barn-like gambrel roof and what could be a decent backyard.

It is also in what Spencer hopes is a strategic location. A half-block away, the popular Gooseberries restaurant sits on the southeast corner of Chippewa Street and California. Buildings on the southwest and northeast corners of the intersection are each slated for major renovations, sparked by grants in recent years from the federal Department of Housing and Urban Development.

"It's a really good time to invest on that block," Spencer says.

Demolishing a building costs an estimated $10,000 on average. Spencer, whose ward includes Gravois Park, says they spent about $15,000 on the California house. It will go on the market for the standard Land Reutilization Authority's standard $1,500 price.

In return, the city will be free of the burden of maintaining it and will have preserved some much-needed density while saving an irreplaceable asset, Spencer says. She's hopeful it will also help knit together a struggling neighborhood that has some potential.

"If our only recourse that we have is to take a building down, it's sort of sad," she says. "It's actually really sad."

Editor's note: This story was updated after publication to correct the amount of the property tax proposed as part of Proposition NS.