Take It from a Soccer Fan: Vote “No” on the MLS Stadium Measures 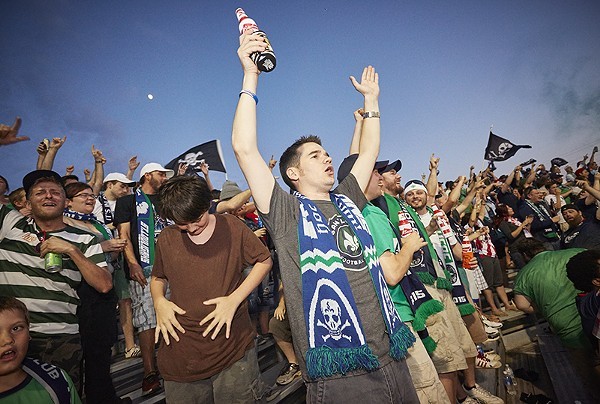 For the second time in two years, St. Louis city residents are debating whether to spend millions of dollars in public funds on a sports stadium. In the previous instance, developers convinced the Board of Aldermen to provide $150 million for a riverside monument to American football, only to see their efforts thwarted by noted shitbag Stan Kroenke. Today things are a little different: The sport in question is soccer, developers want $60 million from the city, and there’s no Kroenke to sully the deal with his grim, mustachioed spectre.

But while some details may have changed, the rotten core remains the same. Once again, rich men are manipulating St. Louisans’ sense of civic pride in order to siphon essential funds from a poor city. Due to the inherently unfair and outright usurious nature of this type of deal, I humbly ask that on April 4 you vote “No” on the two ballot measures that would utilize city money to construct a professional soccer stadium.

Please believe me when I say that I do not make this request lightly. Along with being a proud city resident, I’m also an avid soccer fan who spends way too much time at the Amsterdam Tavern watching the beautiful game. I’ve been hooked ever since I saw the great Dennis Bergkamp score this beauty in the 1998 World Cup, simultaneously making me a lifelong supporter of the Dutch national team as well as his club side Arsenal.

Although those teams might not mean much to the average St. Louisan, it’s likely that Arsenal’s owner Stan Kroenke does. The notoriously private tycoon hardly uttered a word to the public as he moved the Rams to Los Angeles, yet he remained the archvillain during the whole sorry saga. This is because the man is a pox, a blighted scrap of humanity, Nietzsche's abyss intertwined with Yeats’ ever-widening gyre. His atrocious nature acted as an easy beacon for people’s hostility and made public support hard to come by for the developers and politicians who wanted to build their $1 billion stadium on the river.

Fast forward to today, however, and the picture of the resistance is not as clear, at least from where I’m standing. With no Kroenke-esque figure to generate negative and far-reaching headlines, average citizens may not be aware of the details surrounding the current soccer stadium deal. Instead, these people are more likely to be courted by propaganda emanating from MLS2STL, a group launched by the owners of St. Louis FC to entice a top-level soccer club to the city. The organization recently hired Mayor Slay’s former chief of staff to lead a $1 million campaign to drum up support for the stadium measures. Along with branded yard signs and beer coasters, MLS2STL will soon hold organizing meetings at the Amsterdam to distribute literature and teach supporters talking points.

One of the group’s central claims is that city residents will pay nothing unless they go to a game because the stadium will be funded by a use tax paid primarily by businesses. Of course, this convenient factoid neglects to mention that revenue from the use tax currently goes towards “public safety, public health and affordable housing.” So rather than fund these essential services, the city will instead spend $4 million annually over the course of fifteen years for its stake in the stadium.

No need to worry about that, says MLS2STL, because the stadium could ultimately generate as much as $17 million in new tax revenue. The only problem: This shiny heap of money will take at least 30 years to accrue. And that’s only if everything goes according to plan and the stadium remains packed with fans and free of any larger issues.

Then there’s the matter of how the two stadium-funding ballot measures came about. The MLS2STL leadership originally wanted $80 million from the city to fund the stadium, a deal so bad that the alderwoman who originally sponsored the bill began to urge her colleagues to oppose it. Eventually the Board of Aldermen settled on two measures: one that raises the use tax along with another tax increase that’s ostensibly meant to fund Metrolink expansion. As city officials readily admit, though, it could take as long as a decade before they’re ready to start laying track for a new route. In the meantime, money that unsuspecting voters think will be spent on Metrolink will almost certainly go towards building the soccer stadium.

Finally, I’m of the mind that funding a professional stadium with money drawn from a city as poor as St. Louis is an immoral act, plain and simple. Although some neighborhoods have made great strides in recent years, thousands upon thousands of people continue to live in impoverished areas where basic services are already scarce. Our business and government leaders should be working to lift these communities up rather than straining them further by removing $60 million from the city’s coffers in the name of “civic pride.”

Still, even with all my high and mighty talk of morality, there’s a significant part of me that badly, achingly wants to see professional soccer played in the city of St. Louis. I can picture it so vividly it brings tears to my eyes: Walking to the Amsterdam for a few pre-game pints; taking the shuttle downtown with my dad, sister and all my rowdy friends; the pitch a glistening emerald in the sun or a soggy slop in the rain; cheering and chanting, cursing and keening. All the things that make the game beautiful, right in my own back yard.

But no. Not like this. Compared with the hardships that so many fellow St. Louisans face, a project like the proposed MLS stadium should only be seen as an extravagance that the city cannot afford. And given the organizational power of a well-funded MLS2STL and the lack of a public boogeyman like Kroenke, there’s a good chance that this wasteful indulgence could become a reality. So if you feel like I do, tell your people to go to the polls on April 4 and vote “No” on Proposition 1 and Proposition 2.