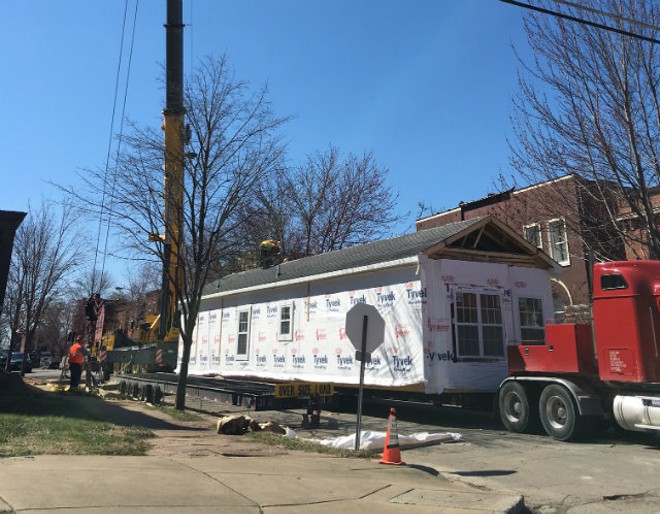 It was a rude awakening for a pair of neighborhoods that pride themselves on both their striking architecture and their community involvement: Many residents first learned that pre-fabricated houses were on the way to Tower Grove East and Tower Grove South when one showed up on a tractor-trailer.

The ready-for-installation newcomer, first spotted Wednesday in Tower Grove East, quickly had locals buzzing. With a little sleuthing, neighbors reported that a development company listed it as one in a series of seven modular homes planned for the area — and that one of the homes was even slated to replace a much-loved community garden in Tower Grove South.

As it turns out, however, things are not quite as dire as residents fear. The home that arrived Wednesday, slated for 2912 Michigan, is definitely happening. But everything else about the project is in limbo, the two alderwomen who represent the area tell the RFT.

For one thing, the community garden has been spared, at least for now. Alderwoman Megan Ellyia Green, who says she was just as blindsided by the news of the infill project as some neighbors, says she learned last night that the developer's proposal for that parcel, at 4259 Connecticut, was rejected by the city's Land Reutilization Authority, or LRA. The LRA's garden lease program encourages neighborhoods to plant gardens; it's fair to assume the agency didn't want to disrupt the two-year-old community planting.

Alderwoman Christine Ingrassia, whose ward houses the remainder of the lots on the developer's website, says the LRA also rejected the developer's plans to build on 2902 Michigan.

The company behind the units, Thrive Development, promises "smart urban infill development in the heart of our great city." Founder Ryan Sheridan says he voluntarily agreed to take the plan for the garden site off the table — but he says he continues to have an option for the other parcels. 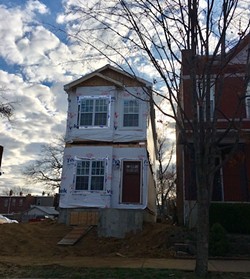 At this point, though, he says only the one home is moving forward. He's building it on spec and plans to put it on the market for more than $200,000. "Per square foot, it's going to be one of the more expensive homes in the neighborhood," he says — with the sort of new construction details not available to city buyers at that price point. He believes that once people see the home for themselves, opposition will crumble.

Ingrassia is skeptical. The alderwoman tells the RFT that Sheridan presented plans for the home on Michigan to the Tower Grove East neighborhood association more than a year ago.

"I was interested in the idea of affordable housing, but we had concerns about the particular look of his design," she says. "It just didn't fit in with the aesthetic integrity of the neighborhood." The association asked Sheridan to come back with updated plans. That was the last Ingrassia heard, she says, until the home literally showed up on wheels.

Both Ingrassia and Sheridan agree that the city has little recourse when it comes to design concerns on privately owned lots in the neighborhood. While Tower Grove East is a historic district on the National Register of Historic Places, it doesn't have a local code that enforces design or construction standards (unlike, for example, its neighbor to the northeast, Lafayette Square). That means the neighborhood's power to enforce its standards is basically nonexistent, Ingrassia says.

But LRA lots are a different story, and Sheridan says it owns all the lots that he's looking at for the remainder of the project. (All three are on Michigan Street east of Tower Grove Park.)

Sheridan is convinced he can sell the LRA — and the neighborhood — on what he's doing, and continues to hold his options on the lots in hopes of doing just that.

As for Ingrassia, she says the agency is taking a wait-and-see attitude for now. She believes that the city agency will be sensitive to the neighbors' design concerns — and that means something different from the house now being installed on 2912 Michigan.

"Tower Grove East has been supportive of affordable housing," Ingrassia says, noting that the area has a wide mix of price points. "Not all neighborhoods are like that. But the design he showed us doesn't fit even under the very loose standards of the National Register."