Despite some recent reports to the contrary, the man who killed Michael Brown has not changed his story about what happened during the fatal altercation on August 9, 2014. And despite some bombastic headlines, not all that much has changed about what we think we know about Brown's death, either.

The confusion surrounds a nearly three-month-old legal document from a still-pending wrongful death lawsuit filed by Brown's family. The lawsuit is aimed at Darren Wilson, the former Ferguson officer who shot and killed the unarmed eighteen-year-old (and has since disappeared from public life). The document, an "interrogatory," is comprised of 173 written yes/no questions. Among other things, the document shows Wilson admitting that he and other Ferguson officers used the N-word to refer to black people, though Wilson was allowed to clarify that his use of the word was limited to "[repeating] a racist remark made by someone else."

The document represents a rare instance of Wilson being grilled outside the context of a criminal investigation. In fact, aside from his media interviews with ABC's George Stephanopoulos and the New Yorker's Jake Halpern, this is the first time we've seen Wilson in anything close to an adversarial interview.

But the former officer's responses in the interrogatory have been badly misinterpreted, possibly because an interrogatory, despite its name, does not actually work like a police interrogation. In particular, Wilson's responses prompted several national news websites to publish stories claiming that the interrogatory showed Wilson contradicting statements he'd previously made to police investigators and a St. Louis County grand jury.

The problem is that the document reveals nothing of the sort. On Wednesday, in response to criticism by the Washington Post's Wesley Lowery — who actually broke the story about the interrogatory's existence — Harriot updated the piece but defended his interpretations, calling them "separate conclusions."

The contested information about the gun comes from questions 38 and 40 in the interrogatory document, which can be read in full here:

Harriot concluded from this passage that Wilson had contradicted a key element of his previous testimony: that Brown had tried to take the officer's gun during a scuffle that took place through the open window of Wilson's police SUV.

The problem is that such a conclusion misstates the officer's previous testimony. Wilson actually testified that he'd drawn his pistol in response to alleged physical attacks from Brown, and only then did Brown attempt to grab his gun.

For reference, here's what Wilson stated one day after the shooting during an interview with a St. Louis County Police Department detective: 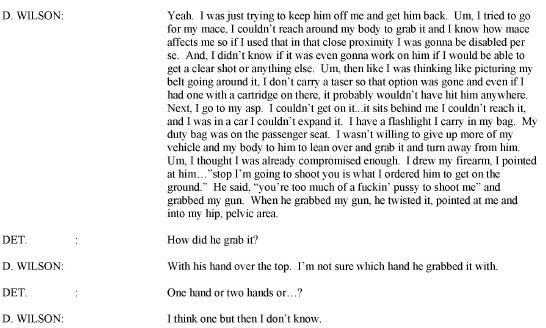 And here's what Wilson told grand jury members in September 2014. 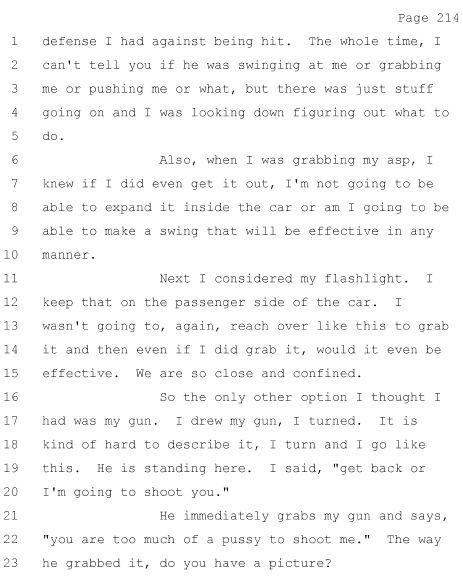 However, since the interrogatory's questions are framed in such a limited way — and lacking context of the moment-by-moment events of the struggle — Harriett and others read the response as a startling admission that undercut Wilson's previous justification for using deadly force.

It wasn't just Harriot who made this mistake. KMOV's Russell Kinsaul drew the same erroneous conclusion in a story yesterday, suggesting that Wilson's statements in the interrogatory "may show" contradictions with his previous testimony. KMOV even managed to entangle Saint Louis University law professor Marcia McCormick, who remarked to Kinsaul that if Wilson was lying about Brown reaching for the gun, "What else did he lie about?"

In reality, there is no "may show" here. The persistence of this misreading can probably be chalked up to the disjointed timeline of the interrogatory's questions and the case's general complexity. (It's also worth remembering that the interrogatory's questions were selected and structured by attorneys who are actively trying to prove that Wilson lied about what really happened that day on Canfield Drive.)

Indeed, the messy dispute over the interrogatory shows more than anything that questions remain about Brown's death — and these are questions that clearly exert a force more than two years later. On Sunday, the screening of previously unreleased surveillance video in a new documentary showed Brown in the Ferguson Market engaging in an attempted (and very small-scale) drug barter hours before his death. Some people immediately jumped on the footage as proof that Brown could not have robbed the store later that day.

The video's release triggered protests and boycotts of the store; employees were accused of suppressing the footage and helping police slander Brown's character. Since its release, though, serious doubts have been raised about what that footage actually shows. And its relevance is even more in doubt: Whether Brown had a deal or didn't have a deal with store employees, it's his interaction with Wilson that proved deadly — not whatever happened in the hours that preceded it.

There's no bombshell here. These two recent additions to the story of Brown's death have done little more than renew the tragedy, offering (at best) embellishments to the parts of the story we already know. In the end, what we know about the death of Michael Brown remains pretty much intact — and whether we believe him or not, the man who killed him is standing by his story.
Follow Danny Wicentowski on Twitter at @D_Towski. E-mail the author at Danny.Wicentowski@RiverfrontTimes.com