The bag of weed first appears at 1:13 a.m. in surveillance footage from Ferguson Market on August 9, 2014. At the store's checkout, Michael Brown, a lumbering 18-year-old wearing a Cardinals baseball cap, reaches into the right pocket of his khaki shorts and tosses a small, dark object onto the counter. A clerk picks it up, handles it a bit and gives it a sniff before passing the baggie to another store employee.

In the video, Brown almost walks away from the counter with a plastic bag containing two boxes of cigarillos, but he returns them (and two sodas) before exiting the store. The entire interaction runs less than two minutes.

Brown would be dead less than twelve hours later, but not before returning one last time to the Ferguson Market. At around noon, surveillance cameras captured Brown pushing the store's owner into a rack of merchandise and leaving with an unpaid-for box of cigarillos.

The earlier footage of Brown in the store was known to police investigators but never released to the public. But after the New York Times hyped a documentary filmmaker's acquisition of the "previously unreported" footage on Saturday, a fresh protest broke out Sunday — leaving a Ferguson officer with a broken nose and one man charged with "attempting to cause a catastrophe" for trying to blow up a patrol car.

The footage reignited the smoldering anger felt by activists (and Brown's family), who have long maintained that police officials intentionally smeared Brown's character during the investigation into the fatal August 9 confrontation between the teen and then-Ferguson officer Darren Wilson.

For Jason Pollock, an independent filmmaker who spent more than two years researching his documentary Stranger Fruit, the footage of Brown tossing a the bag of weed to the store clerks dismantles a key part of the police narrative surrounding Brown's death — specifically, the idea that Brown was a violent criminal who robbed the Ferguson Market mere minutes before he was stopped by Wilson outside a nearby apartment complex.

“They destroyed Michael’s character with the tape, and they didn’t show us what actually happened,” Pollock told the Times. Pollock was referring to the decision by the Ferguson Police Department to publicize evidence of Brown's robbery, while omitting the earlier footage that, in Pollock's mind, revealed Brown's true intentions when he walked into the store for a second time on August 9.

In a clip from the film embedded in the Times story, Pollock narrates over the surveillance footage from Brown's first visit to the Ferguson Market in the early morning hours on the day of his death:


Mike is about to leave the store, but decides to have the clerk hold his things behind the counter for him. The next day, with his hands politely behind his back, Mike goes back into the store to get his stuff... St. Louis County has written documentation that we found which shows they saw the 1:13 a.m. video tape, but they leave out what really happened that night in their report. Mike traded the store a little bag of weed, and got two boxes of cigarillos in return. He left his items at the store and he went back to the store the next day to pick them up.

Mike did not rob the store.


Notably, neither the video clip nor Pollack's reported comments to the Times offered an explanation for why Brown would shove the store's owner hours after the alleged drugs-for-cigarillos transaction.

Pollock's documentary premiered Saturday at the South by Southwest festival in Austin, Texas, and landed with a big splash. His publicizing of the Ferguson Market footage drew shocked reactions on the national stage (witness this breathless tweet from lefty documentarian Michael Moore) and also locally, with St. Louis Treasurer Tishaura Jones and former U.S. Senate candidate Jason Kander weighing in.

The new video about #MichaelBrown makes me sick to my stomach. I always had a gut feeling that he didn't steal anything. #Ferguson

Someone in #STL County hid this video. Mike Brown's family deserves to know who cast their late son as a thief. https://t.co/XmPhYulkP4

Johnetta Elzie, a well-known protester in Ferguson who has continued to work as a civil rights activist, tweeted that Pollock's documentary had made her "angry all over again."

I'm just angry all over again. Rage even. And now we'll watch these incompetent police try to lie over and over again. Traumatizing.

But one day after the Times published Pollock's footage, the filmmaker's bombshell scoop started showing cracks around the edges. Jay Kanzler, the attorney representing the Ferguson Market and its employees, accused Pollock editing the August 9 surveillance footage in order to exclude the moment where the store clerks rejected Brown's attempt to trade the bag of weed. Kanzler vowed Sunday to release the full version of the tape on Monday.

And Monday afternoon, the longer version was indeed released by none other than St. Louis County Prosecuting Attorney Bob McCulloch, the same prosecutor who presided over the grand jury investigation into Brown's death.

“It’s not as though [the surveillance footage] was hidden away somewhere, as this fellow with his video project was trying to say,” McCulloch said during a press conference. If fact, McCulloch claimed that the video of Brown's 1:13 a.m. visit to the Ferguson Market had been deemed "inadmissible and irrelevant." His prosecutors never showed it to the grand jury.

McCulloch pulled no punches during the press conference. He called Pollock's film a "pretty pathetic attempt at a video production."

“This is a clear attempt to distort this and turn it into something it isn’t," said the prosecutor. "It’s very clear there was no transaction between Mr. Brown and the store employees, and to suggest he’s coming back to get what he bartered for is just stupid."

McCulloch's remarks bring us back to the bag of weed. Because if Brown did not actually trade the bag of weed for the cigarillos, then Pollock's conclusion — that Brown returned to Ferguson Market to finish the deal and pick up his items — falls apart completely.

During a separate press conference Monday afternoon, Kanzler similarly blasted Pollock's editing of the footage and accused the filmmaker of reopening the community's wounds.

"This whole ugly issue has been brought back into the forefront because a documentary filmmaker made an unfounded and baseless claim that the folks at the Ferguson Market exchanged cigarillos and two sodas for a bag of marijuana. That is 100 percent false," said the attorney.

Kanzler stated that he personally conducted extensive interviews with the store clerks who interacted with Brown on the morning of August 9. While Brown tried to barter a bag of weed for the boxes of cigarillos, Kanzler says, the clerks didn't accept the trade. Kanzler says that Pollock edited out the parts where Brown appeared to be arguing with the clerks.

Crucially, Brown appears to retrieve the bag of weed before leaving the store. As evidence, Kanzler points out that the video shows Brown walking out carrying an object in his left hand. 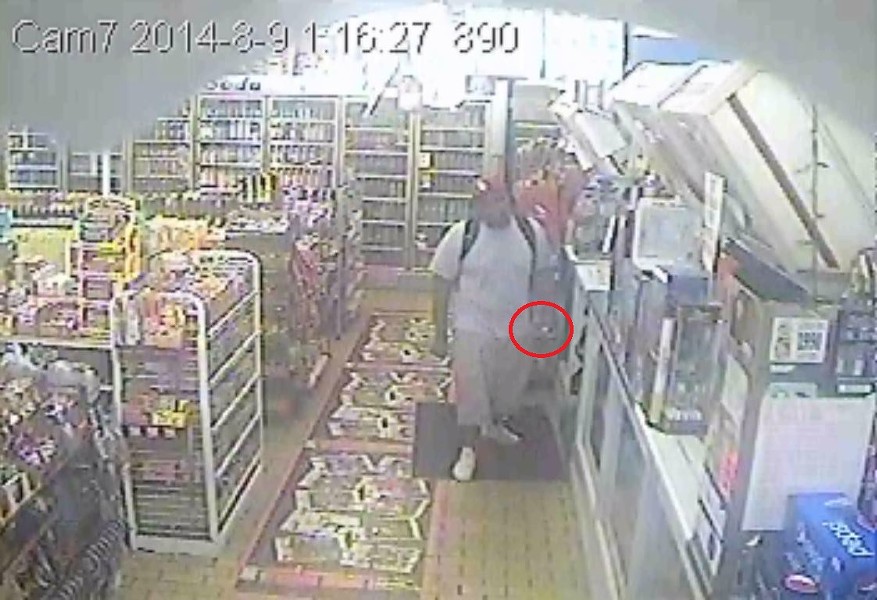 "He's taking what he put upon the counter back out of the store with him," said Kanzler. "He's not a happy camper.

For his part, Pollock denied accusations that he intended to mislead the film's viewers. In an interview with the Associated Press, Pollock called McCulloch "A master at deception," and maintained confidence in his film's conclusions. "Anybody who sees that video knows exactly what they see," said Pollock.

But it's fair to question whether Pollock's allegations and the newly unveiled surveillance footage matter. Even as progressives have eagerly seized on the documentarian's assertions (and the filmmaker has blasted the media for previously missing what he argues is a huge deal), Brown's behavior in the store reveals nothing about the physical altercation on Canfield Drive that ended in Wilson shooting Brown six times, nor does it shed light on the reasons that Brown's death ignited a protest movement that drew the eyes of the world to the modest north county suburb.

As Pollock indicated to the Times, however, many protesters and activists have never forgiven the Ferguson Police Department for its initial decision to release video showing Brown's Ferguson Market robbery. The video release came less than a week after Brown's death; at the time, Ferguson police chief Thomas Jackson told the press that Wilson was unaware of the robbery, and that the officer had stopped Brown simply because the teenager was walking in the middle of the street.

That crucial detail would later change, as Wilson ultimately claimed that he'd recognized Brown's clothing and the box of cigarillos from the radio descriptions of a suspect who had robbed Ferguson Market. Radio dispatches eventually backed up Wilson's account, but the flip-flops and perceived bungling by the Ferguson police cast a thick layer of suspicion over the investigation.

On Monday night, a small group protesters gathered outside Ferguson Market, chanting warnings at customers pulling into the parking lot or walking into the store. "They lied about Mike Brown!" one protester shouted.

The protesters offered the would-be customers free cigarillos and cigarettes, so long as they had valid ID. Dime bags of weed were nowhere in evidence.