Tishaura Jones Lost, But Her Supporters Vow to Fight On 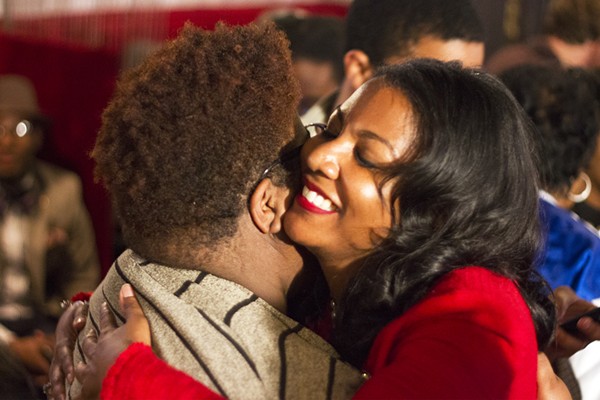 On Tuesday night, as election officials tallied the results of St. Louis' Democratic primary — with a crowded mayor's race suddenly down to a neck-and-neck battle between Alderwoman Lyda Krewson and Treasurer Tishaura Jones — the only thing left to do was wait, and drink, and hope.

Krewson's campaign watch party, held at Carpenters Union Hall, could have doubled for a gala of citywide notables. Beneath projected images of Krewson on the campaign trail, a crowd of prominent attorneys, business owners and politicians ravaged an open bar and buffet trays.

Things were quite a bit different at the Jones watch party, located a few minutes' drive away in the Grove neighborhood. A younger, noisier crowd packed shoulder-to-shoulder inside the ShiSha Restaurant & Lounge. While Krewson's party at time felt like a wedding reception, Jones' shindig crackled like a Friday night at the club. 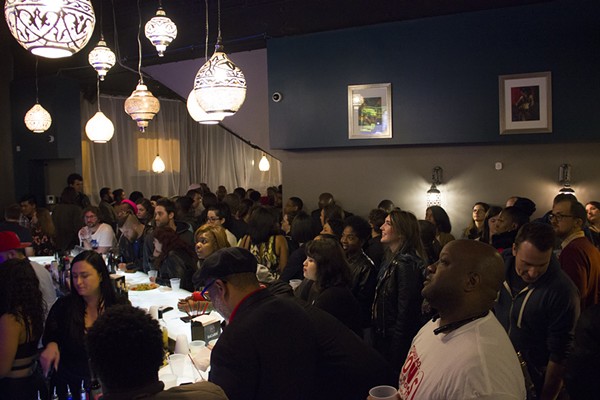 And why not? There was still optimism in the air. Progressive candidates were winning key positions on the Board of Aldermen, and early results showed Jones closing on Krewson. This was the moment activists and supporters had pined for: a tipping of the city's political balance toward a young, progressive coalition of voters inspired by Black Lives Matter protests and Bernie Sanders' presidential run.

There was also anxiety. About an hour before Jones made her concession speech, activist Kayla Reed put voice to that worry.

"We as citizens need to demand more than talk from these candidates, or we’re going to keep getting the same things," Reed said. A Black Lives Matter organizer who emerged from the Ferguson protest movements, Reed pointed out that voters had recently elected Kim Gardner as St. Louis' first black Circuit Attorney. If the city's electorate could shake one historical trend, Reed said, they were surely ready to break another and elect Jones as the city's first black female mayor.

That is, as long as Jones' thunder wasn't diffused by three other black candidates vying for the position: Board of Aldermen President Lewis Reed (no relation to Kayla) and aldermen Antonio French and Jeffrey Boyd.

As the night wore on, anger toward the three men grew.

"If Antonio French and Lewis Reed and Jefferey Boyd were not in this race, and those numbers went to Tishaura, the race would be over already," Reed said as she leaned against a bar counter near a TV blaring the early election results. "In St. Louis, race always matters. I think when we look at these numbers coming in, there were too many black candidates."

The reasons for Jones' mayoral loss will likely be debated for some time, but the numbers suggest the truth in Reed's comments. Jones lost to Krewson by just 888 votes, while French, Reed and Boyd drew around 20,000 combined votes. And with Krewson was the heavy favorite in fundraising and backing from the city's well-heeled developers and their lawyers, that fracturing mattered. Had even one of the men dropped out of the race, things would have likely looked much differently for Jones.

In her concession speech, Jones alluded to the fact that the city's black mayoral candidates had splintered a diverse and progressive voting bloc that clearly had enough muscle to beat Krewson — if only that bloc had voted together. Jones scored donations from Jada Pinkett Smith and buzz from the national media, but ultimately she needed a less crowded field at home to beat the race's centrist.

"The work doesn’t end with just this race. It begins tomorrow," Jones told RFT after the speech.

Despite her loss, Jones will remain city treasurer; that position will afford her a rare vantage point to encourage the reforms she championed during the campaign. "All of the dirty laundry about St. Louis was brought up in this race, inequity, disinvestment, disenfranchisement, the Delmar divide, crime and public safety, we know what the solutions are," she said. "We still have a strong coalition of people that stands ready to work and to hold our administration and all our elected officials accountable for results."

After Jones' concession speech, many supporters were in tears.

"We lost, but we still gave them hell," said campaign volunteer and local activist Kennard Williams. But while Jones came up short, Williams notes that she came achingly close to toppling the political status quo. With 32 percent of the vote and a galvanized group that realizes just how close they came to notching a primary victory, Krewson won't be able to afford to ignore concerns raised by the city's younger, more progressive voters.

"It goes to show that the establishment, their power is waning and we’re closing in on them," Williams says. "They can't pull the same things they have before."
Follow Danny Wicentowski on Twitter at @D_Towski. E-mail the author at[email protected]