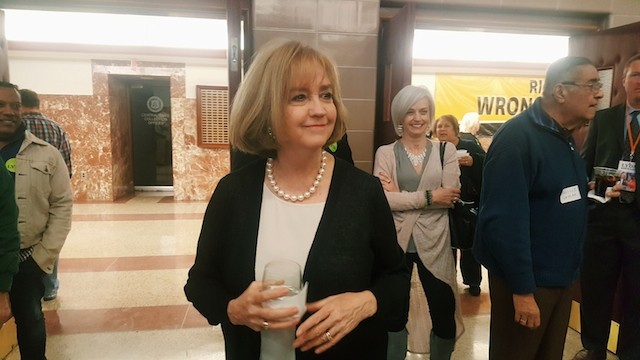 Alderwoman Lyda Krewson won tonight's Democratic primary, squeaking out a victory over City Treasurer Tishaura Jones in a race that tightened as the night continued.

Krewson now becomes the near-presumptive winner in the general election next month — St. Louis hasn't elected a Republican mayor since the 1940s. If she wins that race, Krewson will become the city's first female mayor.

The city's longtime comptroller, Darlene Green, coasted to an easy win in her primary, while utility executive Andrew Jones handily beat out two competitors to earn the Republican nomination.

Turnout was at 28.3 percent of city's voters.

Alderman Antonio French, who won the endorsement of the Post-Dispatch, finished a distant fourth. He conceded around 10 p.m.

"I'm proud of the campaign we ran," French told Fox-2. "We stayed positive when others went negative."

Lewis Reed, president of the Board of Aldermen, finished third with 18.31 percent of the vote. He also conceded around 10 p.m.

Alderman Jeffrey Boyd notched just 2.68 percent of the vote, while perennial candidates Jimmie Mathews and Bill Haas found little favor with voters, each scoring less than half of one percent.

"There are a lot of good people who are running in this race — there's some good ideas that each of them have," Krewson told the RFT earlier in the evening. "I think this is democracy. This is how we do it in our country. You want to run, you run. You get out there, you try to persuade the voters, see what happens."

Krewson took a serious lead when the absentee ballots were counted — scoring 33 percent of the votes cast among the seven candidates, well ahead of all her rivals.

She held onto that lead as the night continued, though by 10 p.m. it shrank to 31.8 percent, putting Jones within about 1,000 votes — and striking distance.

But Krewson, as the only serious contender in the race who was both a centrist and white, had clear advantages in the crowded field and managed to parlay them into a victory.

In her concession speech tonight, Jones alluded to the fact that other white candidates — Police Chief Sam Dotson, Collector of Revenue Gregory FX Daly — dropped out early, leaving an easier path for Krewson, while the field of black candidates remained crowded.

People asked, she said, why the black candidates didn't have a meeting and come to some agreement to thin their numbers.

"You know what, we did," Jones said. "You know what happened out of that meeting? The women decided to come together and support each other!" In that, she referenced state Senator Jamilah Nasheed, who dropped out early and threw her endorsement to Jones' campaign, as well as, perhaps, throwing a dig at the male rivals who likely cost her the race. "Jamilah, I am forever grateful to you for that, and we will continue to work together."

Added Jones, "I don’t want you to think this is the end, because I’m not sad, no. Because I’m going to tell you what we do next. With this campaign, we turned this electorate on its head. And I want us to stay united and stay in contact, because we are the force that’s going to keep the next administration accountable."

The darling of the city's progressives, Jones suggested that she intends to build a movement. (It helps, undoubtedly, that she retains her post as the city's treasurer.) "So we are going to organize, we’re going to meet, because change happens from the ground up. ... We will not accept the status quo, no matter who’s in office.”

Krewson now faces the winner of the Republican primary, as well as at least one independent: the Rev. Larry Rice, who runs a controversial downtown homeless shelter. Political newbie Kacey Cordes is mounting an independent bid, but faces an uphill challenge: The Board of Elections has denied her request to be on the ballot, and Cordes is suing the board to gain access.