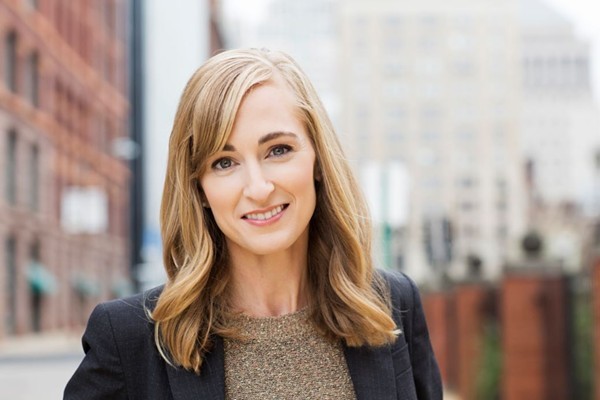 The St. Louis Board of Election Commissioners doesn't want Kacey Cordes' name on the city's general election ballot next month, but the mayoral hopeful isn't accepting their rejection. Now, what began as an outsider's independent campaign for mayor has morphed into a lawsuit accusing the city's Election Board of incompetence.

Cordes, a 38-year-old project manager at U.S. Bank, has ambitions of taking the mayor's office by an unusual route: Beating the winner of today's Democratic primary. Pulling off victory that way would be unprecedented in a city that has historically treated primaries as the only real elections in town.

But Cordes knew she was inviting trouble when she walked into the Board of Election offices on February 13, the date of the deadline to file as an independent candidate in the general election. Although she paid the required filing fee and signed a formal declaration of candidacy, Cordes failed to turn in the 487 voter signatures the law said she needed to be included on the April ballot.

As we reported at the time, Cordes asserted that her campaign did not need to collect even a single signature. She argued that the requirement was only stipulated for "non-partisan candidates," a separate designation, she insisted, from an independent candidate like herself. (And regardless of the legal argument, Cordes' campaign had simply failed to collect enough signatures by the deadline.)

Nine days after Cordes turned in her nominating paperwork, the Election Board responded with a five-page letter that could be summarized as "Nice try, but nope."

According to the letter, if Cordes wanted a place on the April ballot, she was indeed obligated to collect 487 signatures from registered St. Louis voters, or two percent of the total vote cast during the 2013 mayoral election. And in the Election Board's judgement, Cordes' arguments about the separation between "independent" and "non-partisan" candidates amounted to a distinction without a difference, since the city's ordinances use the terms interchangeably: "The city [election ordinances] appears to use 'nonpartisan' and 'independent' synonymous when referring to candidates for city elected offices who are not members of the established political parties."

The letter concluded: "Thus, your name will not be placed on the ballot as a candidate for the office of Mayor at the April 4, 2017 General Municipal Election."

The letter was signed by Gary Stoff, the Republican Director of Elections for St. Louis. Stoff is also named as a defendant in Cordes' lawsuit, along with the City of St. Louis and the individual election commissioners, Benjamin Phillips, Paul Maloney and Mary Wheeler-Jones.

But it didn't take Cordes long to up the ante. Her lawsuit now seeks a court order to prevent the Election Board from printing the April 4 ballots until her attorneys get a chance to persuade a judge that she deserves a place in the election.

In a written statement, Cordes acknowledged the odd timing of the lawsuit, coming just one day before a crowded primary contest between seven contenders — one of whom Cordes ultimately hopes to campaign against.

"While we hate to distract in the waning days of the City of St. Louis mayoral primary election, the Election Board left us no choice," Cordes wrote in the statement. The Election Board's rejection exposed "critical problems," she added, "starting with its failure to comprehend and pronounce basic State of Missouri and City election law."

The fate of Cordes' campaign now lies in the hands of a judge. But even if she loses, there's a different (and no-less intriguing) independent mayoral candidate who is already ensured a spot on the general election ballot. Like Cordes, Larry Rice, the embattled founder of the New Life Evangelistic Center homeless shelter, turned in his nominating paperwork and filing fee to the Election Board before the February 13 deadline.

There was just one difference. Rice turned in 589 valid signatures.