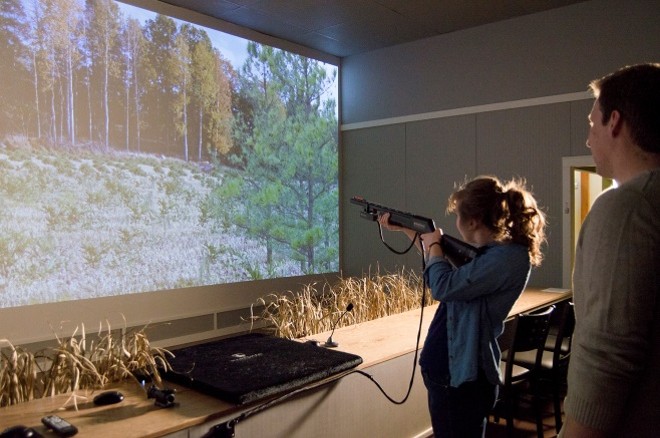 Do you like hunting, but hate going outside? The St. Charles County Heritage Museum has just the thing for you!

A donation by former beer magnate August A. Busch III will allow St. Louis-area residents to hunt duck, bears, deer, boar and other big game on a Marksman Training Simulator, all in the comfort of an air-conditioned room devoid of that pesky "nature" stuff. Experience all the fun of sitting still, being quiet and paying attention, but without the onerous burden of grillable meat.

Now, you may be thinking: Isn't this basically just Big Buck Hunter? And to that we reply "no." Big Buck Hunter is Pokey LaFarge's stepfather. He taught Pokey how to ride the rails and keep birdseed in the cuffs of his pants to better lure birds close enough to turn them into dinner. Hell of a guy, that Buck. Fists like hams, voice like a train whistle.

On the contrary, Busch III's donation is an interactive digital hunting simulator that is said to have the largest video shooting surface in the world. According to the St. Charles County parks department, it is one of only three of its kind in existence. (We're assuming III had to get rid of it because Augie IV kept showing up drunk and trying to load live ammo into the rifle.)

The simulator is high-tech stuff, with the ability to track gun movement, detect proximity to your target and replay each shot. The parks department imagines it will pair well with your upcoming birthday party, scouting event, gun club practice or corporate outing. The rental fee is $75 for an hour, $200 for three hours. (Reservations can be made by calling 636-949-7535, and must be made at least two weeks in advance.)

For the full experience, come dressed in day-glo orange. Bring your own Busch Beer, of course — and maybe some pre-purchased game so you don't starve later.