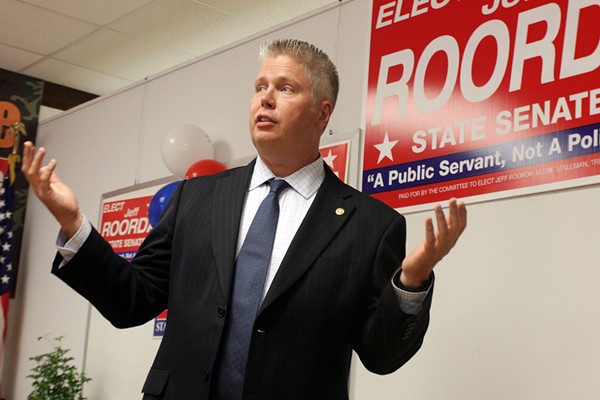 Two years ago, an aldermanic committee hearing was flung into chaos when the spokesman for the St. Louis Police Officers Association, Jeff Roorda, collided with a woman in the audience, sparking a scuffle that was caught by TV news crews and immediately shared to viral-status by livestreamers.

Afterwards, the woman, Cachet Currie, made formal complaint and demanded the ex-cop be charged with with third-degree assault. But the Circuit Attorney's Office ultimately decided not to pursue criminal charges against Roorda. Currie, though, wasn't content to let the matter slide. She's now pursuing a lawsuit against Roorda and his bosses at the police association.

The suit, filed in December in Circuit Court but only this month served on the police association, is seeking $500,000 in punitive damages.

"He has never been reprimanded in any way in for it," says attorney Jerryl Christmas, who is representing Currie. "Jeff Roorda disrespected her and assaulted her, and I think she should be compensated for what she suffered."

Even without the assault allegation, Roorda's presence at the January 28 committee hearing became a symbol of the tensions between die-hard police supporters and advocates for criminal justice reform. When Roorda showed up to the hearing, he wore a wristband bearing the words "I am Darren Wilson," a sign of solidarity with the Ferguson officer who shot and killed Ferguson teenager Michael Brown in a confrontation on August 9. The killing was followed by prolonged protest, civil unrest and a region-wide soul-searching that continues to this day.

Protesters and Black Lives Matter activists also came to the hearing that day, resulting in an overflow crowd in the City Hall meeting room. Things started going downhill when Roorda objected to the murmuring/heckling that accompanied a police officer's testimony.

"Come on, mister chairman, how about some order here, huh?" Roorda yelled at the committee's chair, Alderman Terry Kennedy. The outburst only increased the crowd's jeering. When they quieted, Kennedy retorted to Roorda: "Excuse me, first of all, you do not tell me my function."

At this point, Roorda attempted to muscle his way toward the front of the room. Video footage shows Roorda pushing aside Currie just before the crowd closes in around him.

(Note: the audio of the clip below is probably not safe for work.)


Video Production Services
After the fracas, Currie told reporters she had been trying to leave the room when she ran into Roorda, who then allegedly grabbed her and threw her to the floor.

Roorda, however, claimed that he was the real victim, and that it was Currie and other "anti-police radicals" who attacked him on the way to the podium. He elaborated when questioned by the Guardian, saying he only grabbed Currie to steady himself after she allegedly elbowed him and stamped on his feet.

The lawsuit alleges Roorda pushed Currie from behind before throwing her to the ground, leaving her with a lacerations on her head and broken eyeglasses.

Reached Thursday by phone, Roorda declined to address specific allegations, but did say that he considered the lawsuit "preposterous" and intends to counter-sue. Roorda referred all other questions to his attorney, Neil Bruntrager, who did not respond to a message left at his office.

The lawsuit also names the SLPOA as a defendant. The police union represents around 1,000 officers, most of them white, and the lawsuit alleges the union failed to supervise Roorda's behavior. (St. Louis' black officers are largely represented by a separate union, the Ethical Society of Police.)

It's worth noting that Roorda is one of the leading voices alleging a nationwide "war on police" — even landing a CNN interview after accusing then-President Barack Obama of having police officers' blood on his hands.

Roorda's reputation and connection to the police union has also intruded on the St. Louis mayoral race: The SLPOA's endorsement of Alderwoman Lyda Krewson made her a target for critics who are disturbed by the police union's continued support of Roorda. During a recent mayoral debate, audience members held up signs that read "Fire Roorda." And last night, she said the union should do just that, releasing a statement calling for his termination after some nasty comments he made about Krewson's opponent, Tishaura Jones.

"Today I call upon the elected leadership of the St. Louis Police Officers Association to fire Jeff Roorda," Krewson said in prepared statement. "When I am mayor, he will not be welcome in my office."

In Currie's case, Christmas maintains that the union's refusal to hold Roorda accountable only adds justification to the litigation.

"They have gone on to keep him as their representative, and Jeff Roorda has used that platform to promote himself nationally," Christmas says. "I think that he is the wrong reflection for the St. Louis Police Officers Association. He’s a bully, and someone needs to stand up to him."