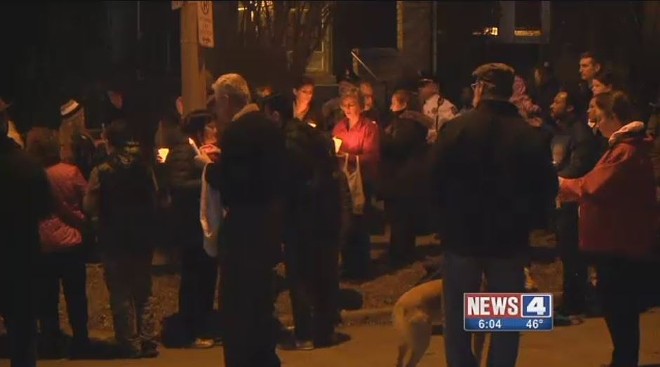 Police have arrested a sixteen-year-old in a murder that shook the Tower Grove South neighborhood.

The teen, whose name wasn't released, and an accomplice tried to stick up 72-year-old Kenneth Spalter of Pound Ridge, New York on Friday night, police say. Spalter, who was reportedly visiting relatives near Juniata Street and Gustine Avenue to celebrate the birth of a grandchild, struggled with them and was fatally shot.

The killing prompted stunned neighbors to hold candlelight vigils during the weekend.

Police now suspect the teen was part of a separate carjacking earlier in the day in the 3200 block of Samuel Shepard in the Grand Center neighborhood. He was arrested on Sunday on armed robbery charges in that case and held in a juvenile center.

Investigators were later able to tie the 2009 Hyundai Sonata stolen in the Grand Center robbery to the murder on Juniata. Police had previously said Spalter had just pulled into a driveway when two suspects surprised him and demanded his keys.

After he was shot, his assailants ran to an awaiting vehicle and fled south on Gustine.

KMOV.com
We welcome tips and feedback. Email the author at doyle.murphy@riverfronttimes.com or follow on Twitter at @DoyleMurphy.