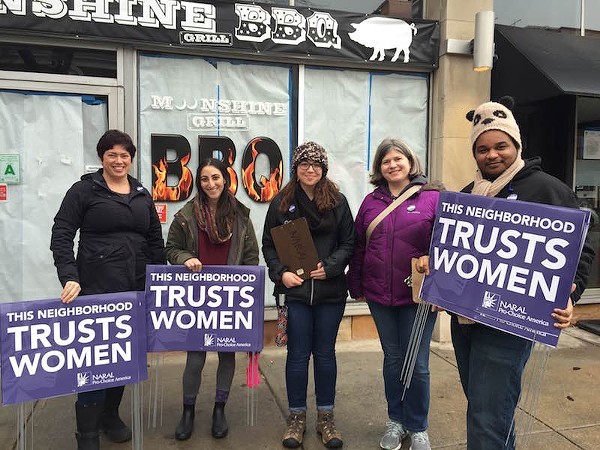 On Monday, Mayor Francis Slay signed into law a bill that would make St. Louis a "sanctuary city" for reproductive choices — in essence saying that a woman cannot be fired, demoted, denied housing or evicted because she either gets pregnant or terminates a pregnancy. The Archdiocese opposed the bill, but found relatively easy passage at the Board of Aldermen, with a 17 to 10 vote.

For NARAL Pro-Choice Missouri, the legislative victory was part of a conscious decision to go on the offense on the municipal level rather than just play defense at the state legislature. Executive Director Alison Dreith now plans to work with allies on the board to reintroduce in April a bill to mandate a buffer zone at the state's only abortion clinic, and she hopes to have even more friendly members on the Board of Aldermen to help her do it.

"We're endorsing in races for the first time ever," she says of this March's Democratic primary, which will likely select some news members of the Board of Aldermen as well as a new mayor. (NARAL has endorsed City Treasurer Tishaura Jones for the mayor's job.) "People are finding they have to take us seriously."

St. Louis has long been a blue island in the middle of a red state, but NARAL's strategy refuses to take it for granted. The organization recently has focused on door-to-door canvassing within St. Louis, hoping to increase its local footprint. It now boasts 8,000 members in the city alone.

Still, before the celebration Monday came some tense moments on Friday at the Board of Aldermen, as Dreith acknowledges. Alderwoman Christine Ingrassia, who co-sponsored the bill, had told her going into the meeting that they had the votes for passage — but then Dreith was summoned to the dais by President Lewis Reed. "You guys don't have the votes anymore," he told her. "You should withdraw the bill and come back later."

Dreith was stunned, but conferred with Ingrassia before making a decision. Ingrassia was sure they had the votes. Dreith decided they had to go for it — who knew where things would stand when the board reconvened months later?

"I said, 'If anyone has flipped, I'll hold those people accountable,'" Dreith recalls.

Reached by phone Monday, Reed says he wasn't trying to pull a fast one; he genuinely believed the bill didn't have enough votes for passage. And contrary to what Dreith believes, he says he didn't mean they'd have to wait until April; he assumed at the time that the board would be reconvening this week. That, he thought, would give Dreith time to firm up her votes. "I told her she should consider it," he acknowledges. "You've got to be smart about when you have the votes. If they would have lost one of their votes and the thing failed, it would be dead."

Still, that white-knuckle decision proved the correct one. ("I never had a doubt in my mind," Ingrassia says.)

Its victory now on the books, NARAL plans to continue fighting, at City Hall and across the state. And while Donald Trump's ascension to the presidency has been crushing for progressives, Dreith will admit to seeing one small silver lining.

"The people who were apathetic are no longer apathetic," she says.