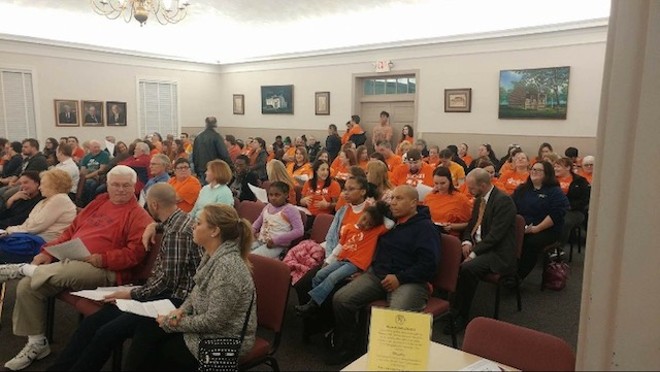 Pit bulls could be returning to Florissant — with two council members introducing a bill to repeal the north county suburb's seven-year-old ban on the dog breed.

The bill got its first reading last night in a meeting filled with pro-pit activists, most of them wearing orange T-shirts. As the RFT reported in a 2016 cover story, a group called the Florissant Bully Alliance has fought to overturn the ban, which has led to 201 dogs being confiscated and slaughtered.

Such bans are known as "breed-specific legislation," or BSL. More than 86 jurisdictions in Missouri have some sort of BSL on the books.

The new ordinance that's been introduced in Florissant, co-sponsored by Jackie Pagano and Jeff Caputa, will need at least five votes (and no mayoral veto) to become law. Mandy Ryan, a member of the Florissant Bully Alliance and the founder of the statewide organization Stop BSL Missouri, says she's hopeful the group has garnered sufficient support thanks to a seven-month campaign aimed at council members.

"Our group doesn't back down," she says.

And they're also not putting all their eggs in one basket.

Last year, a bill introduced in the Missouri House would have barred local governments from being allowed to ban pit bulls or other dog breeds, and overturn bans like the one in Florissant. It won passage, but was killed in the Senate by Senator Brian Munzlinger (R-Williamstown), who simply refused to schedule the legislation for a vote.

This year, Ryan says, a word-for-word replica of the bill has again been introduced in the House. HB 905 is being sponsored by Representative Bruce DeGroot (R-Chesterfield). Ryan's group plans to journey to Jefferson City to support it — and this time, she vows, it's going to get a vote in the Senate, too.

"We are planning on calling and emailing everyone just as much as we did last year," she says. And that's true both in the Statehouse and at Florissant City Hall, she notes. "The citizens are speaking, and the city needs to listen."