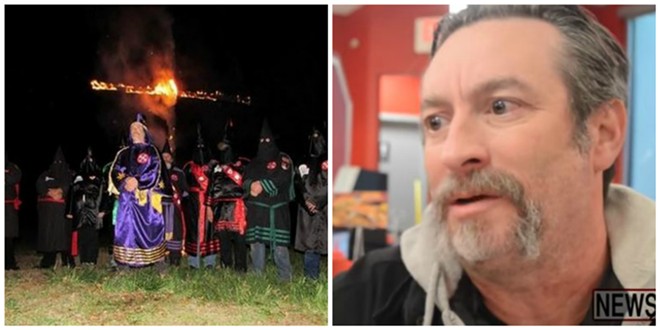 St. Francois County has levied murder charges against the wife and stepson of Frank Ancona, the 51-year-old "Imperial Wizard" of the Traditionalist American Knights of the Ku Klux Klan whose body was found Saturday with a gunshot wound to the head.

Malissa Ancona, 44, and Paul Jinkerson, 24, were each charged with abandonment of a corpse, first-degree murder and tampering with physical evidence. Jinkerson, who police believe actually shot Frank Ancona, was arrested Saturday on an unrelated warrant, while Malissa Ancona was arrested Sunday evening.

Frank and Malissa Ancona lived together in Leadwood, a tiny rural town (population: 1,246) near Farmington, about 68 miles south of St. Louis. Malissa initially told police that she last saw her husband when he departed the couple's home Wednesday between 8:30 and 9 a.m. He didn't show up to work Wednesday or Thursday, but Malissa never filed a missing persons report. That didn't happen until Friday, when his employer called Leadwood police to report Ancona missing.

On Saturday, a family fishing the near the Big River near Belgrade spotted a body, which police identified as Ancona. A Washington County coroner told the Kansas City Star that Ancona died from a gunshot wound to the head.

According to a probable cause report authored by a St. Francois County Sheriff's detective, Jinkerson shot his stepfather while he was sleeping in the master bedroom of the home in Leadwood. The St. Louis Post-Dispatch reports that investigators found "extensive blood evidence" in the bedroom and that Malissa Ancona admitted that she helped clean up the blood in an effort to hide evidence of the crime. Jinkerson then allegedly dumped Ancona's body near the river.

Ancona's gaudy title made his murder national and international news, but it's difficult to say what his role as "Imperial Wizard" actually meant. The media-friendly Ancona regularly granted interviews on his "Klanline," claiming his group was motivated not by hate, but by a sense of white solidarity and racial separatism. However, Ancona filled the group's website with hate speech targeting black people and screeds touting the superiority of white Christians.

"A lot of people think a klansman is this big bad evil person that's looking to lynch and kill everyone that's not white. That's completely false," Ancona told Riverfront Times in May 2014. "A lot of these people could be could be your next door neighbor, the guy working on your car, the sheriff's deputy."

Yet besides dropping pamphlets for a Klan-based neighborhood watch program, Ancona and his American Knights didn't seem to do all that much. One exception was during the Ferguson protests in 2014, when Ancona released a flier promising to bring "lethal force" against "terrorists masquerading as peaceful protesters." Ancona's flier and comments about the Ferguson protests landed him with fresh infamy and a very tense exchange with MSNBC's Chris Hayes.

Incredibly, before her arrest, Malissa Ancona agreed to an on-air interview with KMOV (Channel 4) reporter Alexis Zotos on Sunday. Through tears, Malissa Ancona described her husband as "generous" and "nice to everyone he met."

"He didn't think anyone should be killed or murdered," she said. "He just believed in separation of the races."