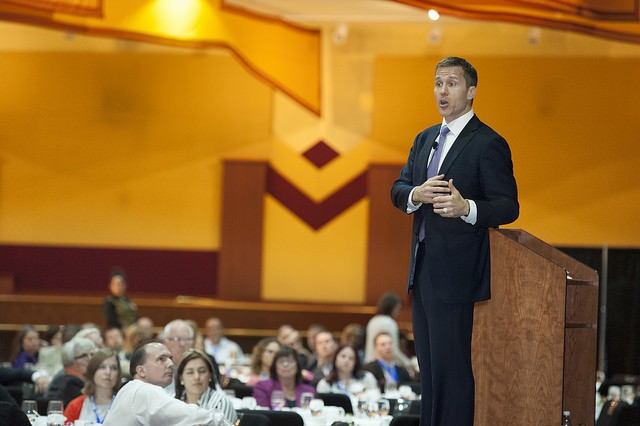 Yesterday, Missouri's newly elected governor, Eric Greitens, signed legislation that would kneecap unions by allowing employees to opt out of paying dues — a plan known as "right to work" now in place in 27 states across the U.S.

But just a few hours later, the unions said not so fast — with the AFL-CIO filing paperwork stating its intention to challenge the plan with a referendum.

The petition paperwork was jointly filed with the NAACP.

Now those two groups will need to gather enough signatures by August to get the referendum on the ballot. If they succeed, it will pause implementation until voters get a chance to weigh in in November 2018. And since getting on the ballot is typically just a matter of having enough money to organize a giant petition drive, odds are very, very good this thing is going to a vote.

So what are its odds at that point? Once a swing state, Missouri is clearly becoming more and more conservative with each election cycle. The dearth of Democrats who've been elected statewide of late makes that clear. And "right to work" has been very popular in conservative states.

But the November 2018 election will see lower voter turnout since it's an off-year for presidential elections. And that could help union households, who are likely to be highly motivated to block the plan at the ballot box. (One expert notes that the General Assembly could move things up and ask for the vote to be held in April 2018, but that would likely feature even lower turnout.)

Beyond that, it's one thing to vote for an attractive, gun-toting outsider for governor; it's another thing to sign on for each individual piece of his agenda. And as the Kansas City Star notes, voters have frequently disagreed with the legislature when given the chance to weigh in via referendum: All but two of the state's 26 referendums have been successful in reversing the General Assembly. (Still, since the last referendum in Missouri was 35 years ago, who knows how much has changed since then?)

The AFL-CIO and NAACP said this in a joint press release:

Today, as we celebrate black history month, we recognize that as much has changed, and that far too much has not. The black community and the labor movement are both facing a spike in a systematic efforts to destroy the progress of our communities....

Today, in another tumultuous time in our nation’s history, once again labor and the black community are proud to stand together to fight for a better life for us all. The will of the people will be heard, and Missouri will evade the dangers that right-to-work laws would reap on all our families. [NAACP President Rod Chapel] added, “The NAACP stands firm with AFL-CIO, Missouri’s voice of organized labor to make the lives of workers better throughout the state."

Suffice it to say, this wasn't the slam-dunk of a day that union critics (and the governor) may have anticipated. But it's not clear just yet where all this could go.

In fact, we can be certain only that two groups will benefit from today's actions: the signature-gathering industry, and the local television stations, which are likely to blitz us with a frenzy of commercials on this subject come fall.

Editor's note: A previous version of this story gave the wrong date for when the referendum would likely be on the statewide ballot. It would be November 2018, not November 2017. We regret the error.