In Debate, Mayoral Candidates Grapple With Jeff Roorda — and Their Own Histories 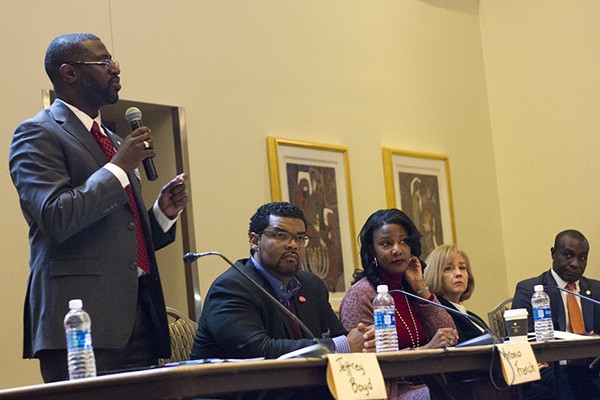 Some candidate forums are lucky to draw a handful of undecided voters. But yesterday's #WokeVoterSTL debate garnered an estimated 1,500 interested citizens — a capacity-busting crowd that filled a student center room on the Saint Louis University campus.

The election is guaranteed to bring major change to the city, if only because Mayor Francis Slay, who's had the job for sixteen years, is moving on. Yet not one of the five major candidates can be characterized as an outsider: Tishaura Jones, a darling of the city's progressives, is the current city treasurer, while Antonio French, Lyda Krewson and Jeffrey Boyd all represent wards on the city's Board of Aldermen. Lewis Reed is the board president.

The debate, officially titled the Mayoral Debate 2017: Questions from the People, was sponsored by a number of local progressive organizations, with activist Kayla Reed and attorney Blake Strode of ArchCity Defenders serving as moderators. Not surprisingly, then, the candidates were repeatably forced to grapple with their respective roles in the status quo.

Also not surprising: It was Krewson, by far the best-funded candidate in the race and also the most moderate, who faced the toughest questions.

Throughout the debate, Krewson's remarks were met with open protest by several audience members, who held signs calling attention to the candidate's endorsement by the St. Louis Police Officers Association — and particularly to the implied link between Krewson and Jeff Roorda, the association's business manager. In the wake of the Ferguson protests, Roorda built a noxious reputation for his cable news appearances and social media posts, where he has regularly pushed the idea that that criminal justice reform is creating a "war on cops."

"I'm going to say this about Jeff Roorda," Krewson said in response to a moderator's question about the endorsement. "I've seen the signs out here and others. Jeff Roorda's comments on social media are incendiary and abhorrent. I do not stand with Jeff Roorda and those comments. But I do stand with the 1,200 city police officers today. I can't help who they hire."

Krewson drew a hearty wave of boos when she declined to call for Roorda's resignation or firing. "He's not a public official, I can't call for him to resign," she said. "I don't think he does a good service to the SLPOA, I'll tell you that right now."

The crowd gave a far warmer response to Jones. The city treasurer received some of the loudest applause of the debate when she blasted Roorda and his divisive rhetoric. She didn't even attempt to land an endorsement from the police union: "Anyone who stands with Roorda, I cannot support," she said.

But Jones also received a prolonged groan from the audience during her response to Lewis Reed's accusation that she was allowing Francis Slay's former campaign manager, Richard Callow, to helm her campaign.

See also: St. Louis Will Get a New Mayor This Spring. Meet the 5 Leading Candidates

The exchange between Jones and Reed was one of several highlighting tensions between the candidates. Reed and Boyd sparred over the 2013 mayoral election, in which Boyd supported the incumbent, Slay, against Reed, who ultimately lost. And French spoke dismissively — if not patronizingly — of Krewson, saying, "She’s a nice lady. But frankly, I don’t believe she understands this city.”

There was, however, a moment of something approaching reconciliation. Last January, Reed was recorded laughing approvingly while radio bloviator Bob Romanik called Alderwoman Megan Green a "bitch," "skanky bitch" and "alderbitch." At the time, Reed and Green were feuding over Green's accusation that attempts to build a new Rams stadium had involved bribery.

At Sunday's debate, Reed expressed contrition for not taking an immediate stand against Romanik's crass commentary.

But Reed does not regret taking donations from Dave Steward, the founder of St. Louis-based World Wide Technology. Earlier this month, Reed failed to respond to RFT's multiple requests for comment about whether Steward had donated money to Reed on the condition that the candidate oppose abortion rights and gay marriage. The question of Steward's contribution to Reed started with state Senator Jamilah Nasheed (D-St. Louis), who herself had sought donations from Steward and claimed that she'd been grilled about her opinions on abortion and gay marriage.

Asked after the debate about Steward, Reed denied that the businessman's donations had come with conservative strings attached.

"Absolutely not," Reed said. As for Nasheed? "She's lying."

Beyond the drama of who's taken money from whom, the mayoral race is approaching the stage where campaign fundraising and spending become an increasingly meaningful barometer.

Krewson is rolling in money. Her campaign has already spent about $282,000 and still has more than $576,000 on hand. Reed and Jones have also broken the six-figure mark.

French and Boyd, however, lag far behind. As of the latest campaign finance reports, French is listed as having only $209.88 in hand. The Post-Dispatch's Tony Messenger tweeted that he thought French was one of the debate's winners (the other being Jones), but French has indisputably struggled to find supporters willing to open up their checkbooks.

The debate was more than just an arena for shade-throwing. The event stood as a rebuke to those fearing that the unrelenting shittery the presidential election has exhausted local voters. Instead, the debate audience overflowed outside the conference room. Event organizers, which included the public interest law firm ArchCity Defenders and the activist group Missourians Organizing for Reform and Empowerment, unveiled an ongoing research effort to document the ties between candidates and contributors, a resource that should prove invaluable to prospective voters.

Because the debate's structure posed questions to one or two candidates at a time, the crowd was left with a handful of head-to-head disagreements by the end of the event. French and Krewson support hiring more police officers, while Jones suggested that the department could use its present resources more effectively, and that the burden on officers could be reduced by adding social workers to the force.

The moderators also raised the issue of a soccer stadium proposal that would require a public vote in April. Voters could be asked whether to sink $60 million in new tax revenue into stadium construction. At a committee hearing last week, Reed cast the deciding tie-breaker vote to keep the proposal alive.

At the debate, Reed told the crowd that he personally did not think the proposal would pass, but that he believed St. Louis residents should have the opportunity to make the choice themselves.

Jones took a different angle on the stadium.

"St. Louis has 99 problems," she said. "And soccer ain't one."
Follow Danny Wicentowski on Twitter at @D_Towski. E-mail the author atDanny.Wicentowski@RiverfrontTimes.com