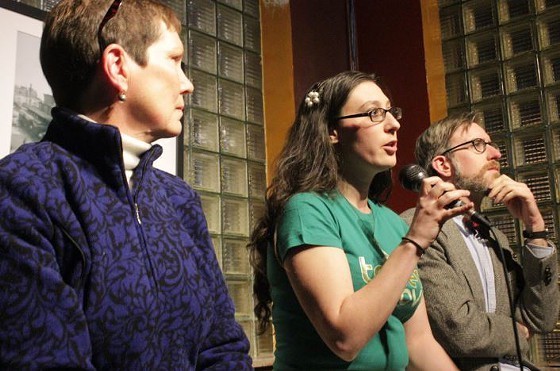 Members of the St. Louis Board of Aldermen have a list of people they consider "Megan Green trolls" — and they use it to determine who to block on Twitter, Alderman Joe Roddy revealed this week.

Roddy made the bizarre claim in the urbanstl.com forum on Tuesday, explaining to Andrew Arkills, who is the president of the Tower Grove South Neighborhood Association, why he'd blocked him.

"[I]f you were blocked you were probably on a list that some of the Aldermen share of known 'Megan Green trolls' and then proved it by your comments on my feed," Roddy wrote. "We all have better things to do than spend our time arguing with someone who lives in the 15th ward or is a campaign shill."

Roddy did not respond to a message seeking comment yesterday.

Arkills does not actually live in 15th ward, which includes Tower Grove East and Tower Grove South. (He's in the 10th, which also includes part of Tower Grove South, as well as the Hill and Southwest Garden.) But Green, who first won her seat in a special election upset, is the 15th ward's alderwoman.

In her three years on the board, Green has become a thorn in the side of the city's Democratic Party establishment. Her accusations of bribery surrounding the NFL stadium deal so outraged board president Lewis Reed that he called them "reprehensible" on a radio show, and then infamously laughed along as the host called her a "skanky ass bitch." (He later apologized.)

Green says Roddy's post was the first she'd heard of any such blacklist. She resists the idea that those who support the progressive agenda are "shills" for her campaign.

"I just think I have a lot of very vocal supporters and constituents — and some of them are people that quite frankly I don't even know, but they're very vocal on these issues," she says. "If asking questions and wanting transparency makes them trolls, I guess they're trolls."

Arkills has been actively involved with the "Team TIF" effort, which has questioned the city's use of tax abatements and incentives. And as the chair of the board of aldermen's powerful Housing, Urban Development and Zoning committee, Roddy has found himself in the team's line of fire. (A presentation he made that linked "criminals" and "residents with children in public schools" as a drain on the city's coffers did him no favors, either.)

Arkills says he reached out to Roddy in September with questions about a development plan and found himself blocked by the month's end, apparently after he "liked" a tweet authored by someone else that was critical of Roddy.

He says he's become frustrated by the way Roddy has "repeatedly and publicly" denigrated the Team TIF members for questioning the city's tax incentive policy (including, in his forum post, Molly Metzger, a professor at Wash U whom Roddy patronizes as "a nice woman, but I wouldn't want her to run the economic development authority for our city").

"I have no problem with people blocking me, it's a free country," Arkills tells RFT in an email. "The main thing that bothers me about the method in which I was apparently added to that list is a) that the legislative branch of our city government (or parts of it) apparently thinks a good use of their energy is drafting a list of people to block on Twitter, and naming it after one of their colleagues.

"It strikes me as extremely odd that they take the time to do that, but our actual issues go largely unaddressed. Highest per capita homicide rate in the country, but at least we have those pesky question-askers blocked."

Editor's note: A previous version of this story contained incorrect information about Andrew Arkills' residence. He lives in the 10th ward. We regret the error.