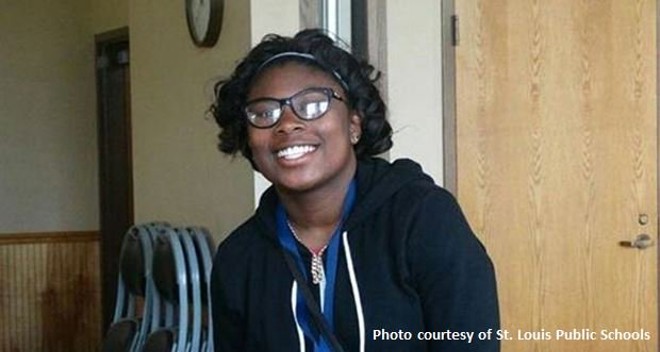 St. Louis police are pleading for information as they try to solve the murder of a fifteen-year-old girl — and head off another potential round of violence.

"We don't need another loss of life," police Captain Mary Warnecke said at a news conference today. "We don't need retaliation. We need somebody to come forward to give us the information we need so we can put a stop to this."

Toni Stevenson, a sophomore at Northwest Academy of Law, had just driven home from a school basketball game on Tuesday evening when two gunmen opened fire on her with assault rifles, police say.

Officers responding to reports of shots fired found the teen's lifeless body still in the driver's seat, parked along the 6000 block of Thekla Avenue in the Walnut Park West neighborhood. The shooting happened shortly before 7 p.m.

Warnecke confirmed that police are looking at surveillance video from the block, but they haven't released the footage or described what may have been recorded.

Stevenson was definitely the intended target, Warnecke said without giving more details. The police captain dismissed reports that the teen had been a witness in a previous shooting.

Police have only the vaguest of descriptions for the suspects, but Warnecke says people know information that could be vital to their investigation. She worries they will seek revenge instead of coming forward.

"We have the fear that there will be retaliation, that someone will try to take matters into their own hand," Warnecke said, adding, "They need to let us do our job."

Police ask anyone with information to call St. Louis Regional CrimeStoppers at 866-371-TIPS.