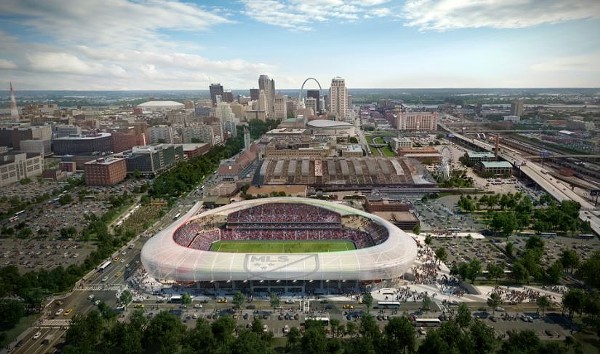 It was little more than a week ago when reporters were all but writing obituaries for a proposal to build a $200 million pro-soccer stadium in downtown St. Louis. The state funding backers had counted on ($40 million in tax credits) was dead at the hand of Governor Eric Greitens, who blasted the plan as "welfare for millionaires." And funding from the city of St. Louis ($80 million in new tax revenue) was dead as well, strangled at the last moment in the Board of Aldermen.

But reports of the plan's demise may have been premature. On Wednesday, a pair of surprise developments appeared both to resurrect state-level cooperation and revive the city bill that would allow residents to vote in April on whether the city should direct tens of millions of dollars toward stadium construction costs.

So, what changed? Let's start with Greitens. Earlier this month, the governor had left no room to doubt his opposition to the stadium plan. "To be clear," he told the St. Louis Post-Dispatch, "I have completely ruled out state funding for stadiums."

But in a press release emailed to reporters at 9 p.m. Wednesday, the group behind the stadium proposal, SC STL, announced that two weeks of negotiations with the governor's office had revealed a "path forward."

"We will continue to work with Gov. Greitens on a state participation proposal that will promote economic development in St. Louis and throughout the region while remaining faithful to the Governor's stance against state funding for building stadiums," said spokesman Jim Woodcock in a statement. "Gov. Greitens has made it clear to us that he is very supportive of adding a new professional sports franchise to the State of Missouri, and that's a sentiment we wholeheartedly share.

The press release was short on specifics, and it's not at all clear how the state could promote economic development tied to a soccer stadium without, you know, putting money into a soccer stadium. We've sent questions to governor's office and will update the story if/when we hear back.

The late-night press release was the second shot of optimism for stadium supporters on Wednesday. The other also involved a public official reversing opposition to the stadium plan.

Last week, Alderwoman Christine Ingrassia, whose 6th Ward includes the proposed stadium site, announced that she would not permit an $80 million tax bill she'd sponsored to move forward to committee. The bill would have siphoned revenue from a separate measure to increase the city's use tax, but only on the condition that voters approve both the tax increase and the stadium funding on the April municipal ballot. With the chances at city funding dashed, the stadium project seemed truly kaput.

On Wednesday morning, however, Ingrassia allowed a pared-back version of that bill to be placed on the agenda for the today's meeting of the Ways and Means committee. The amended bill would reserve only $60 million in tax revenue for the new stadium, reports the Post-Dispatch.

In a Facebook post, Ingrassia conceded that a single day's notice was "absurdly late" to add a bill to the committee agenda, but she noted that waiting any longer would likely eliminate any chance for St. Louis to to land an MLS expansion team. There's also an internal timing issue at play: If Ingrassia's bill is to make the April ballot, it must be passed by the full Board of Aldermen on Tuesday.

"I do not like doing business like this with so little time for us all to scrutinize such a complex project, but I've not been left with much choice," Ingrassia wrote on Facebook. "I am also hesitant to pass up an opportunity for the Board of Aldermen to make their own decision on whether to pass along a sound proposal to our voters, asking them to indicate their preference at the ballot. I also do believe, based on conversations with the ownership group, and what I've researched on my own regarding the MLS timeline, that we will not have an opportunity for one of the four expansion teams if we wait to put this on the August ballot."

This really is the last gasp for the stadium plan. In her post, Ingrassia wrote that the Board of Aldermen will evaluate the various moving parts of the stadium funding proposal at today's meeting, including whether the state is willing to shoulder part of the burden. If city lawmakers don't like what they see and reject the bill, she said, "there is not a path forward." For real this time.
Follow Danny Wicentowski on Twitter at @D_Towski. E-mail the author atDanny.Wicentowski@RiverfrontTimes.com