Tishaura Jones Hits Back on Media Coverage: 'There Are 11 Other Candidates' 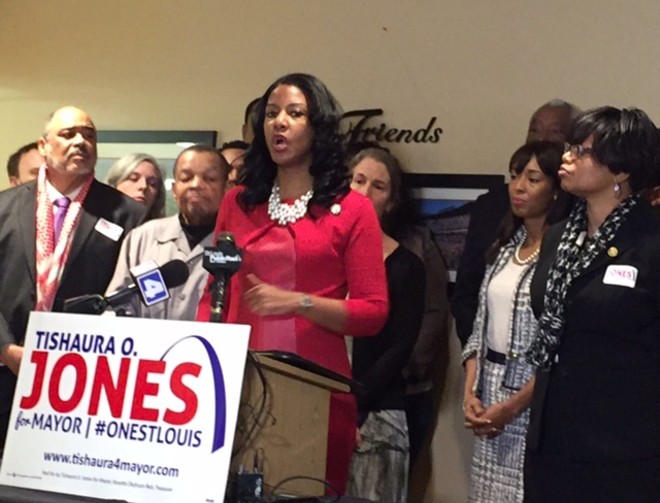 Frustrated by media coverage that's focused on everything from a 20-year-old bankruptcy to the trips she took as a city official, St. Louis Treasurer Tishaura Jones pushed back this morning at a press conference, saying she's become a clear target for other mayoral candidates and people who fear the changes she'd bring at City Hall.

Asked what specific fault she found with the stories, Jones noted that no one else running for mayor seems to be facing anywhere near her level of scrutiny: "If you were visiting from Mars, you would think no one else was running for mayor but me." She added later, "If you're going to talk about me, you need to talk about everybody. ... There are eleven other candidates!"

A surrogate who spoke just before Jones went even further.

"We see these attacks as an attack on the entire community of people of color in this region," said Lew Moye, president of the St. Louis chapter of the Coalition of Black Trade Unionists. The stories, he said, "were clearly an attempt to portray black folks as incompetent and corrupt."

A former member of the house of representatives and the current city treasurer, Jones is one of very few candidates in the mayor's race who've already won citywide. At the same time, her candidacy has picked up some critical endorsements, including that of state Senator Jamilah Nasheed (D-St. Louis), who kicked off the press conference, as well as a host of the city's young progressives, who've been mounting an attack on the city's Democratic status quo from the left.

But after last week's KMOV report focused on her travel, Jones is clearly feeling a bit picked upon. She didn't dispute the allegations at today's presser, though she stressed that she followed proper procedure and documented every expense she submitted for reimbursement. "I have not done anything wrong or unlawful," she said, noting that one of the trips KMOV made the most hay about (using the language "even Las Vegas" on its website) was a trip to lure a national conference to St. Louis.

At one point, a reporter questioned what stories the media should be covering when it comes to Jones' rivals. "You're the journalist," Jones replied. "You do the research. I'm not going to feed you stories the way the other candidates have fed you stories about me."