Eric Greitens Gets a Message From His Neighbors: 'This Neighborhood Trusts Women' 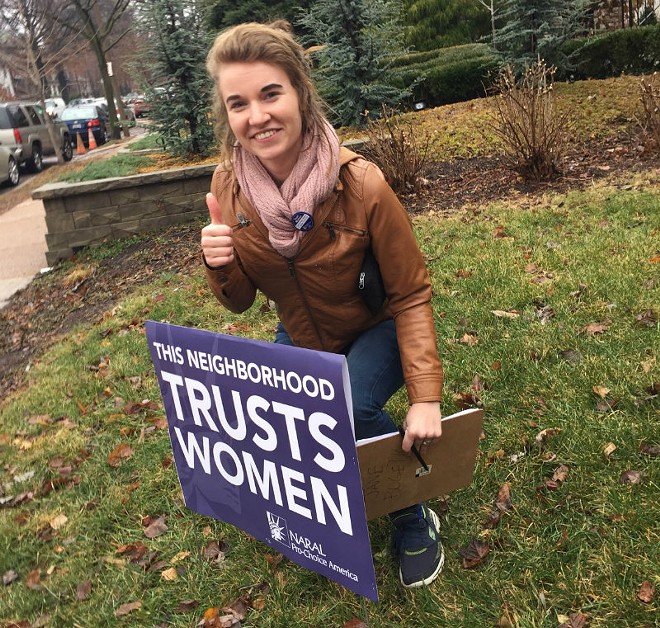 Missouri's newly sworn-in governor, Eric Greitens, got a bit of a brushback pitch from his neighbors in the Central West End yesterday — with yard signs proclaiming, "This neighborhood trusts women."

Yesterday, a group of staffers and volunteers got to work looking for neighbors willing to take them. Kirstin Palovick, the agency's organizing and policy associate, said they found ready takers for about a half-dozen.

"The first three we knocked on, all three said yes," she says.

The team had fruitful conversations with other neighbors (not a single person who opened the door was hostile, Palovick notes) and left their contact information for those who weren't home or wanted to think about it. They're hoping to get a few more up in the coming days.

Dreith believes they send a message that the Republican governor needs to hear.

"Our hope is for them to be up for awhile," Dreith says. "There are nineteen anti-choice bills pending in the state legislature, five of them which have a hearing scheduled for Wednesday at 8 a.m."

Referring to the length of the upcoming legislative session, she adds, "It's going to be a long five months, and as the governor said, he is more focused on fixing the economy. We say that reproductive freedom has everything to do with the economy. Instead of passing more restrictions, when Missouri is already the third most restrictive state in the country, he should leave abortion alone and focus on getting paid family leave to help families who want to work."