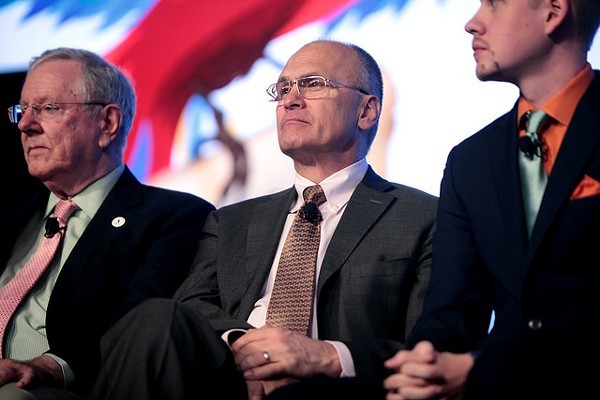 The ex-wife of Andrew Puzder, Donald's Trump's nominee as Secretary of Labor, didn't just allege that he abused her in divorce filings. She also, apparently, made the charges — incognito — on Oprah.

That's the latest from Politico, which reported on the TV appearance yesterday.


Fierstein appeared on the show in a wig and glasses, and was identified only by the made-up name of Ann. Multiple sources, including George Thompson, a spokesman for Puzder and Fierstein, confirmed the appearance. Fierstein did not mention Puzder by name, but a friend of hers who previously worked for her told POLITICO that Fierstein made clear to her that the allegations she made on the program concerned Puzder.

The appearance adds a new wrinkle in the allegations against Puzder, who was an anti-abortion crusader in St. Louis prior to becoming the CEO of Carl's Jr.

As the RFT first reported in a July 1989 cover story, Puzder's ex-wife alleged abuse as part of their divorce filing, with court documents detailing her claims.

But when the RFT reminded people of the claims in December, Puzder's spokesman was quick to bat down to the old allegations. He produced an email from Puzder's ex-wife, Fierstein (identified in our story under her old name, Lisa Henning) saying she'd only made the allegations as a legal tactic — and regretted making the claims.

"I impulsively filed for a divorce without your knowledge and was counseled then to file an allegation of abuse," Henning wrote in the email, dated November 2016. "I regretted and still regret that decision and I withdrew those allegations over thirty years ago. You were not abusive."

Still, our 1989 story contained some information suggesting the claims were more than just a pushy lawyer: Puzder had acknowledged in a deposition that police were twice called to the couple's home. And Henning's lawyer, Daniel Sokol, was quoted as saying he believed her. "I handle 150 domestic relations cases a year. I thought her story was not only credible but true. I would not pursue a cause of action on behalf of a client unless I believed it."

The Oprah allegations suggest that Henning wanted to tell a story of abuse publicly — to the point of wearing a wig and taking on a fake name.

It's not clear what, if anything, has changed since — or whether it will affect Puzder's nomination. “I can’t imagine a single organization that cares about women that would not vigorously oppose him,” Terry O’Neill, president of the National Organization for Women, told Politico.

Winfrey's company tells Politico it can't find a tape of the episode in question.