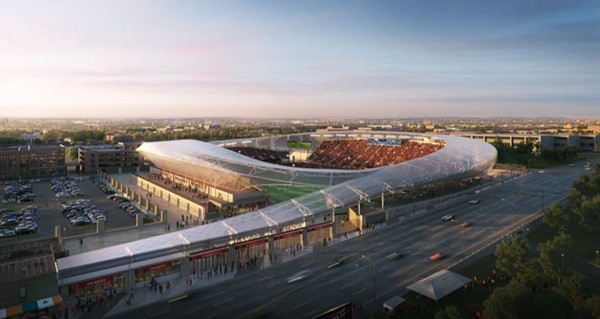 Since unveiling their grand plans in November, the ownership group trying to establish a pro soccer team in St. Louis has insisted that city and state funding — a total of $120 million — would be critical to landing a coveted MLS franchise.

The lion's share of that money, $80 million, was expected to come from St. Louis taxpayers, with residents slated to vote on the considerable outlay. But in a surprise move this morning, the bill's sponsor, Alderwoman Christine Ingrassia, announced that she is junking the proposal.

"That bill will not be moving forward," said Ingrassia during a meeting of the aldermanic Ways & Means Committee, as reported by the St. Louis Post-Dispatch. The bill would have directed revenue from an increase to the city's "use tax" (a sales tax that businesses pay on out-of-state purchases) to fund the stadium's construction.

Jim Woodcock, a spokesman for the ownership group, tells Riverfront Times that Ingrassia's announcement came without warning. "We met with Christine Ingrassia Friday for almost two hours," Woodcock says. "We followed up with multiple emails of information she requested over the weekend and [we] left her phone messages yesterday and last night. She has not called or responded to us, so until we hear from her directly, it's hard to respond to statements made in the media."

If the aldermanic bill is truly dead, it would mean that the ownership group will have to find a way to finance the estimated $200 million stadium themselves — or scrap their plans. Last month, incoming Governor Eric Greitens machine-gunned the MLS stadium plan in a Facebook post, calling it "welfare for millionaires." One day later, the ownership group decided to delay their request for $40 million in state tax credits. And now that door, too, appears to be firmly closed.

Is this the end of MLS soccer in St. Louis for the immediate future? Or just the end of the owners' attempts to secure public financing? Time will tell.
Follow Danny Wicentowski on Twitter at @D_Towski. E-mail the author at [email protected]