St. Louis Woman Gets Busted at IKEA With an Ass-Load of Pan 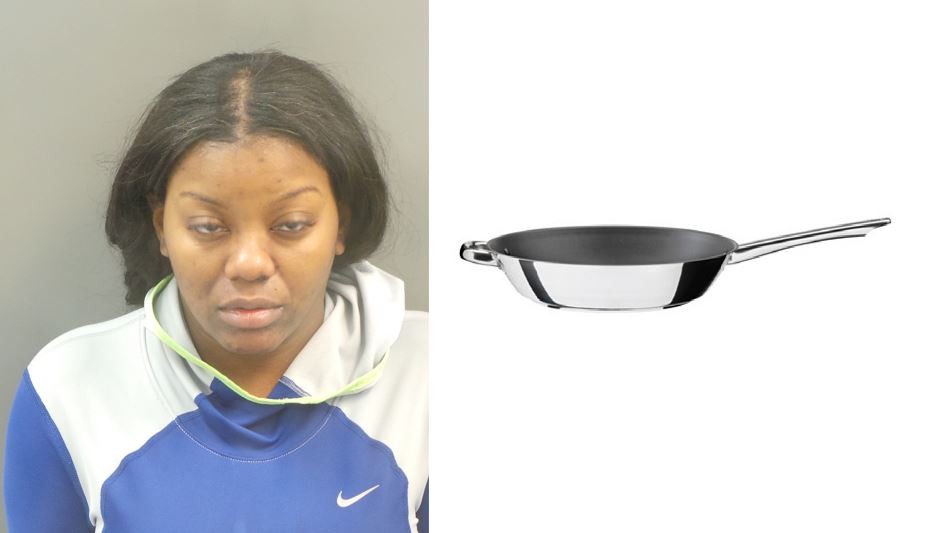 In the criminal justice system, shoplifting crimes aren't considered especially heinous. But try telling that to the poor IKEA cooking pan that was forced to endure the sweaty backside of a woman's leggings last week.

The caper — captured on the video below — ended with Sierra Coleman, 28, restrained in the IKEA parking lot by two incredulous loss-prevention officers, one of whom rebuffed the thief's angry defenses by noting, quite reasonably, "You have IKEA property in your pants."

Indeed, as Coleman struggled to break free of her captors, the curved outline of the pan was entirely visible through the pair of gray leggings — dare we say, a poor choice of shoplifting apparel? — and the handle of the pan stuck straight up from her waistband like the periscope of a non-stick submarine.


According to a probable cause report, St. Louis police had been called to the furniture megastore shortly before 7 p.m. on December 30. Coleman, a resident of the 6000 block of Washington Avenue, was accused by security officers of using a bag to conceal bed sheets and a pan before making a beeline for the exit, bypassing the whole exchanging-money-for-goods thing.

A male security guard attempted to stop the shoplifter from making a getaway, at which point Coleman allegedly bit him in the arm.

What the probable cause report doesn't explain, however, is how the innocent pan — possibly an Oumbärlig or Trovärdig — wound up shoved deep into the recesses of this woman's pants.

Perhaps some things are best left a mystery.

Regardless, the Facebook Live video of the pan-smuggling thief has gone viral since it was posted Friday night, several hours after the cops took Coleman away. ("Is that a pie in the back of your pants?" the camera woman taunts in the video, before assuring an IKEA security guide she's not, in fact, recording video.)

One day after her arrest, Coleman paid 10 percent of a $5,000 bail and is now facing two Class A misdemeanors for theft under $500 and assault in the third degree.

The news gets worse for Coleman. According to online court records, she already had three outstanding warrants stemming from 2008, and now she has to contend with three felony charges — two for forgery, one for passing a bad check.

Cue the part in Law & Order where Detective Briscoe gives his partner a knowing glance. "Looks like this one won't be cooking dinner any time soon," he quips.

Update, January 29, 2020: Three years after the original incident, St. Louis City prosecutors dropped the charges related to Coleman's IKEA pan-theft and assault. Coleman's attorney, Raphael Morris, declined to comment when reached by phone this morning, and it's not clear why the charges were dropped — even Morris was taken by surprise by the development. The St. Louis Post-Dispatch reports that Morris was unaware of the update in his client's case until contacted by reporters this week.