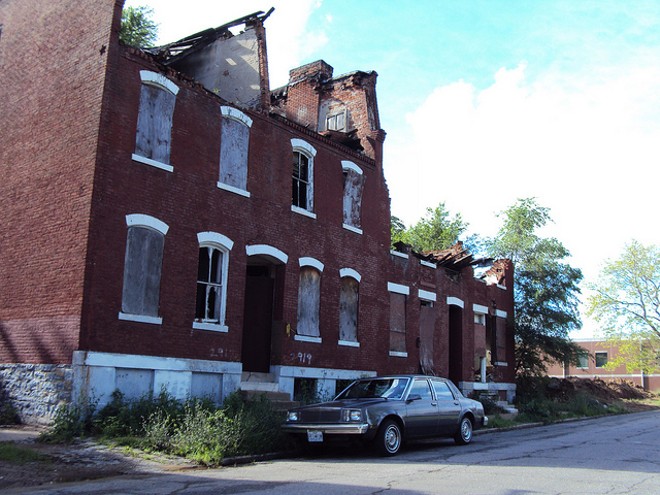 A website looking at gun violence in the U.S. honed in on St. Louis neighborhood the Greater Ville — with a shocking conclusion.

The north city neighborhood, reports the Trace, has a murder rate that far exceeds that of Honduras, "the world's murder capital."

A chart created by Trace hits home just how bad the problem is:

Unfortunately, as best we can tell, the numbers are solid. The site links to up-to-date information published by the St. Louis police department showing that the Greater Ville suffered sixteen murders in 2015 and, so far, has seen eighteen in 2016. With a rapidly dropping population — the Greater Ville lost an estimated 32.48 percent of its residents from 2000 to 2014 — those murders make for a shockingly high rate.

But the small population size isn't just the reason for the Ville's high murder rate. To the St. Louis Metropolitan Police Department, it's also reason to question the entire premise.

"While the statistics do appear correct, they do not tell us anything," a department spokeswoman told us in a brief statement. "The article compares large cities to a neighborhood with a population of only around 6,000. Also, the article only focuses on homicides, a crime that is difficult to predict and prevent, and does not look at total crime."

For more about conditions in the neighborhood, it's worth revisiting the Post-Dispatch's lengthy story from two years ago. The story is focused on the city's fourth ward, which includes both the Ville and Greater Ville, "once the center of the city's black middle class."


Now, the typical household income is in the low- to mid-$20,000s, and unemployment is high. Between the 2000 and 2010 censuses, the population dropped 26 percent. Neighborhoods are pockmarked by vacant lots and crumbling homes, with conditions varying widely from block to block.

The alderman, Sam Moore, said there are 1,242 vacant buildings in the area, a number he repeats for emphasis. Five schools sit empty. There are 1,700 vacant lots. Some entire blocks are just overgrown grass. “I’ve torn down over 600 buildings,” Moore said. “I can’t tear down all of them.”

Interestingly, the police department notes in the P-D story that while murders were up (fifteen in 2014, a number that obviously has only continued to climb), other violent crimes "showed a 56 percent drop since peaking in 2009 ... the biggest drop of any ward."

Notes the daily, "The contradiction is difficult to explain. Falling population and clearance of abandoned buildings obviously play a role. But Moore doesn’t believe that violent crime is dropping at all, and said that if the numbers are down it’s only because police don’t patrol there enough."