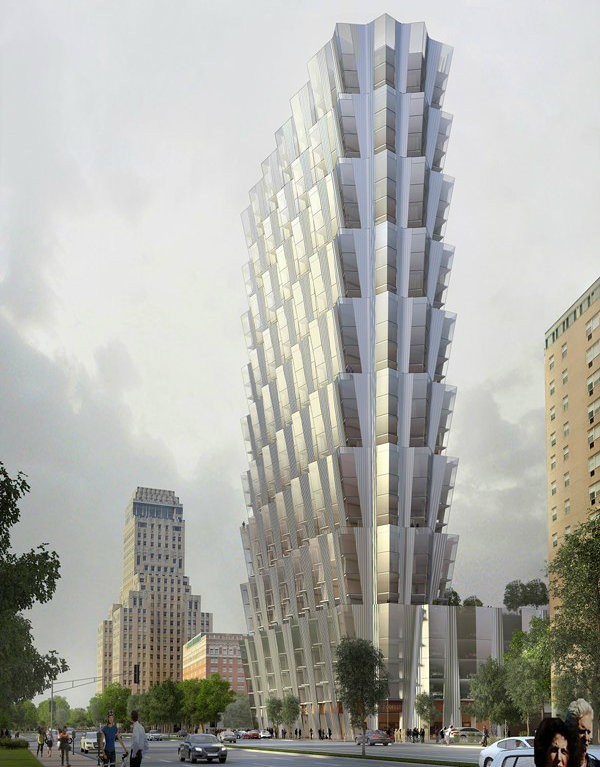 On Monday night, before a crowd in the Schlafly branch library, 17th Ward Alderman Joe Roddy flipped through a slideshow that laid out the case for giving tax incentives to a $130 million 34-story apartment building proposed for the Central West End.

To make his point, Roddy flipped to a slide that explained the basic dynamics of city financing. The slide was titled "How the City Makes & Spends Money."

At the top it listed businesses that pay various city taxes — "MAKE MONEY" in the slide's parlance. At the bottom, reserved for things that empty the city's coffers — "SPEND MONEY" — it listed "Criminals and residents with children in public school." 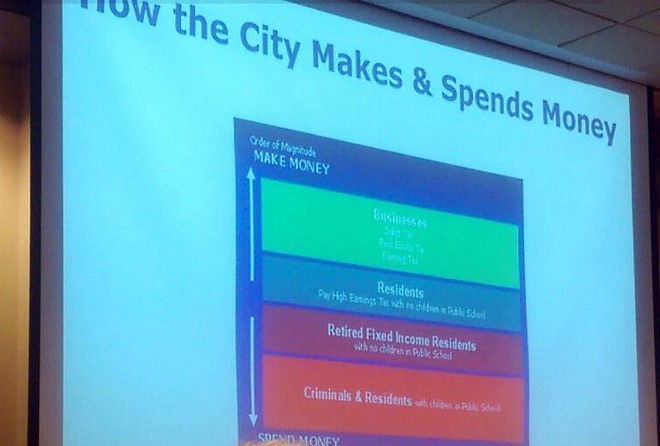 The lumping of criminals and public school families irked Andrew Arkills, the president of Tower Grove South Neighborhood Association. A data analyst by trade who has a deep skepticism for tax incentive packages, Arkills attended the meeting hoping to learn more about the proposed luxury tower. But the slide gnawed at him.

"It was offensive to boil down what makes up a valuable and stable community to what makes revenue and what doesn't," says Arkills. "It was deeply frustrating to hear someone who has been in office for 28 years say that."

He concedes it wasn't technically inaccurate — indeed, schools and law enforcement are services that require gobs of city money — but the shorthand amounted to tasteless simplification, one that appeared to elevate businesses and malign parents and public school students.

Roddy's slide also drew the ire of 22nd Ward Alderman Jeffrey Boyd, who tweeted Tuesday that the slide was "poorly written" and understandably offensive. But Roddy brushes off criticism of the slide as the grumblings of uninformed rabble-rousers who are hell-bent on opposing tax incentives as a matter of principle. "They want to go ahead and misconstrue," says Roddy, noting that his own children attend public school and his wife is a public school teacher. He maintains that the "How the City Makes & Spends Money" slide merely demonstrated the balance between a city's revenue and expenses. And lumping criminals and public schools in a single red block also conveyed the serious consequences of handling the city's finances. "You can either spend money on kids and educate them, or you can spend money when they become criminals later on," Roddy says. "It was intended to show the weight of the decision that’s before us."

Yet progressive activists like Arkills view tax abatements like the one being offered to the tower's developer as evidence of a broken municipal strategy, one that funnels money to well-heeled developers and areas that are already thriving, leaving the rest of the city to pay the bills.

But the Central West End is already the jewel of the city's central corridor — does a developer really need fifteen years of low taxes in order to rent luxury apartments at an estimated $3 per square foot a pop?

"This is going on one of the most valuable properties in the city," says 15th Ward Alderwoman Megan Green. She criticizes the project for not including an affordable housing component, and she believes the tower could be built without tax abatements.

Although Green did not attend the Monday night meeting herself, she's heard concerns about Roddy's presentation.

"Many people I represent send their kids to public school, and they do not want to be viewed as a drain on the city," she says.

Roddy says tower project will target tenants who are young professionals without children. Attracting that demographic to the city is crucial, he says, and after the tax abatement ends, the revenue windfall for the city will be significant. Arkills and Green, however, would argue that the research on the results of St. Louis' tax incentives don't back up those rosy predictions.

On Tuesday night, the tax abatement for the CWE apartment tower project came before the Land Clearance for Redevelopment Authority. After reportedly little discussion, the board voted to support the tax abatement, though the incentive still needs final city approval. The tower project is expected to be completed by 2019.
Follow Danny Wicentowski on Twitter at @D_Towski. E-mail the author at Danny.Wicentowski@RiverfrontTimes.com