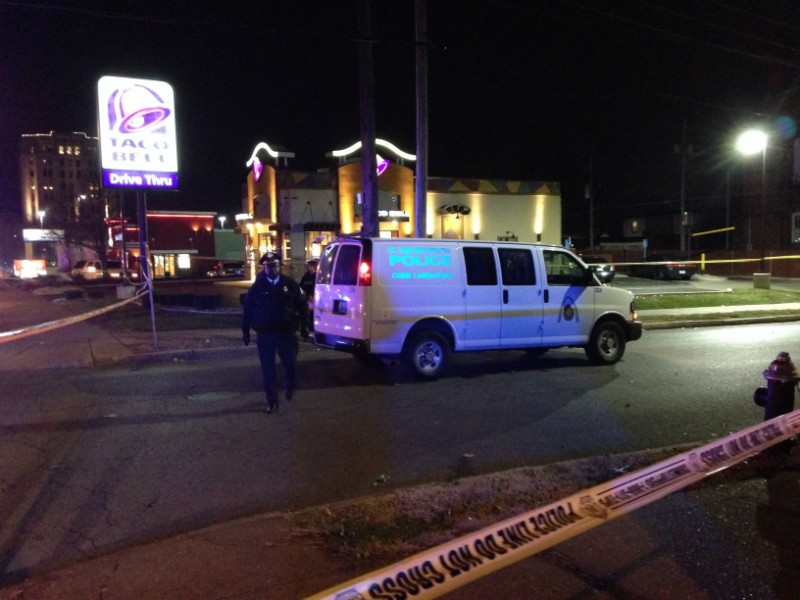 St. Louis cops chased down a Taco Bell robber, firing at him as he sprinted through a south city neighborhood, racing through alleys and hopping fences as he tried to escape, authorities say.

Officers eventually caught the suspect, an ex-con recently released from federal prison, about two blocks away from the South Grand Avenue restaurant, police say. An accomplice slipped away and was still on the loose.

Police Chief Sam Dotson told reporters the two robbers stormed the Taco Bell near Gravois Avenue in Tower Grove South at about 5:45 p.m. and ordered employees to hand over the money.

"Inside the restaurant, the suspects fired one shot to scare and intimidate the employees as they were getting the money," Dotson said.

Police arrived as the men were carrying the cash drawer across the parking lot, Dotson said.

The gunman drew his pistol and pointed it at the two cops, who were still in their cruiser, the chief said. Each officer fired but apparently didn't hit the men. The suspects then split up and ran in different directions.

Dotson said officers chased the one with the gun, firing periodically when he pointed his weapon at them. Police don't think anyone was hit. It wasn't clear if the suspect ever fired.

The captured robber was taken to the hospital, because he seemed to have torn the skin on his hand while scrambling over a fence, according to Dotson.

Officers recovered his gun. Dotson said it's a "unique" weapon that investigators suspect has been used recently in a string of robberies along South Grand.

The suspect's name wasn't immediately released, but the chief said he shouldn't have been on the streets.

"This individual is known to law enforcement, just recently released from federal prison," Dotson said. "Obviously he should not have been released — gone back to a life of crime, gone back to pointing guns at police officers, firing shots in fast food restaurants."

Police blocked off the streets surrounding the Taco Bell. A helicopter hovered overhead as they searched for the second suspect.