In a lot of ways, the Shaw neighborhood is one of St. Louis' gems. Tower Grove Park borders it to the south, and the Missouri Botanical Garden is just across Tower Grove Avenue to the west. Young families fill handsome, two- and three-story brick homes and push strollers along long, leafy blocks.

The problem is the gunfire.

The sound of blasts in the night has long fueled fireworks-or-gunshots debates among residents, but what the neighborhood has endured in the past two months is a string of unambiguously frightening gun battles. One person has been killed and at least four others wounded. Through the first ten months of the year, police had recorded eighteen shootings compared to one for the same time period in 2015.

"I'm 70 years old and I'm crippled," Linda Orellana told a roomful of worried neighbors last week at a community meeting. "I don't want anyone to hurt me or my dogs."

The meeting, emceed by Alderman Stephen Conway, was attended by between 75 and 100 people and focused primarily on options for installing surveillance cameras at the corner of Shaw Boulevard and Klemm Street. Residents, not without reason, see the intersection as the epicenter of the chaos.

On October 8, as people began to gather on the corner for a vigil, a nearby dispute turned into a full-scale shootout. Witnesses reported gunmen blazing away as bystanders literally ran for their lives. Reporter Rebecca Rivas, who covered the aftermath for the St. Louis American, described police marking 58 emptied shell casings when it finally ended.

Three young men were wounded. The vigil was to be in memory of eighteen-year-old VonDerrit Myers Jr., who was killed by police two years before on the same corner.

On November 17, a 21-year-old named Michael Murphy was shot in the back of the head during another spasm of gunfire at Shaw and Klemm. He made it to the hospital but later died. A 22-year-old was also critically wounded.

On November 22, less than three blocks away in the 4000 block of Castleman Avenue, armed robbers surprised a young woman as she arrived at her relatives' home. She handed over her cell phone and purse and bolted inside. When her uncle, who was also armed, stepped out the front door, one of the crooks shot at him, police say. The uncle shot back and hit one of the men in the butt. The wounded robber fired a couple more rounds before fleeing in a truck, police say.

The violence persists even as housing prices climb and the neighborhood continues to gentrify. Once a pocket of drug violence, Shaw is now one of the most sought-after places in the city, with a number of commercial projects in development within walking distance of Shaw and Klemm. The most prominent — a new burger bar by restaurateur Dave Bailey — is set to open next spring on the northeast corner.

Conway told residents that there are a couple of problem houses in the area. He assured neighbors they're currently being addressed by the city's nuisance property system.

"I'm sorry that the people who live (near the violence) have had to live through that," Conway said.

He listed three proposed options for cameras: Privately funding and installing cameras on private buildings near the corner, raising more money to fund cameras that would feed live into the city's crime center or lobbying to use funds from the Eight Ward to bring in cameras.

Tim and Lindsay Hordwedel launched a GoFundMe page to pay for cameras. The couple lives next to Shaw and Klemm, and on the night of the vigil, found gunmen racing through their yard. One month later, Michael Murphy was killed in front of their place.

Few if any witnesses came forward to help police with the investigations, they said. People are worried about retaliation, Tim Horwedel said.

"The answer is to get a witness who can't be killed," he said at the meeting. "And that's a camera." 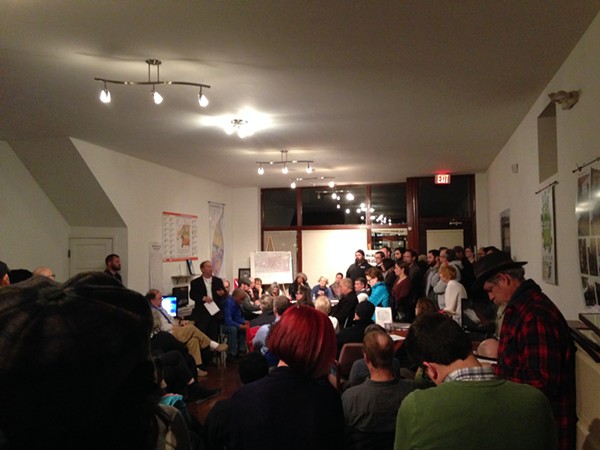 Police have made some progress in solving the recent shootings. A department spokeswoman told the Riverfront Times no one was available to discuss crime in Shaw, but she emailed a few updates on the investigations.

A 22-year-old was arrested in connection with the vigil night shooting and has been released while prosecutors decide whether to file charges.

After the November 22 robbery on Castleman, the wounded thief was arrested after he showed up at a hospital with a gunshot wound to his rear end, police said. The suspect, 20-year-old Andre Durham, is facing charges of robbery, assault and two counts of armed criminal action. His accomplice, another 20-year-old, was also arrested, but released pending an investigation by prosecutors, police said.

Whoever killed Michael Murphy is still on the loose.

Cameras and other security measures have long been discussed in Shaw, but the recent violence has boosted interest. And some key stakeholders are on board: The owner of a two-family home on the corner and the owner of the nearby Shaw Market have both agreed to let people install cameras on their buildings, Conway says. That would be the fastest option.

The online fundraiser has a goal of $4,000, and supporters had already donated $1,350 in five days. The effort is aimed at the privately funded cameras; installing cameras that hook wirelessly into the city's system would cost more — between $10,000 and $12,000, Conway said. It would also take longer, especially if they hoped to use Eighth Ward money.

People at the meeting raised concerns about ownership of private cameras, the handling of the footage and whether the initiative would be effective. A few people pointed out the vast majority of attendees were white, despite the neighborhood's mixed population. But mostly the residents who filled the room said they were in favor of cameras.

"Rather than moving, we're going to try to improve the corner," Tim Horwedel said afterward.

Editor's note: This article has been changed after publication to correct the location of the Missouri Botanical Garden in relation to the Shaw neighborhood.