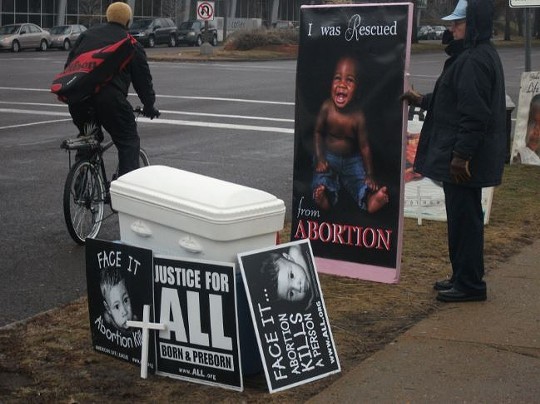 In less than three weeks, Republican and Democrat electors across the country will gather in their state capitals and make their formal — though symbolic — votes for president and vice president. Among them in Missouri will be Republican elector Tim Dreste, a former militia organizer and anti-abortion absolutist who in 1999 was found liable in federal court for making threats to "kill, assault or do bodily harm" to abortion providers.

Dreste was the subject of a lengthy Riverfront Times cover story published the same year as his conviction, in which then-staff writer Melinda Roth documented the St. Louis native's path of zealotry in the 1980s and 1990s.

Dreste's fervor ultimately crossed a line, entering territory outside the bounds of the First Amendment.


The defendants, two anti-abortion groups and 12 individuals, including Dreste, were not charged with any of the 40 clinic bombings or seven murders that took place in the U.S. between 1983 and 1999, but they were accused by two abortion-rights groups and four abortion providers of setting off some of that violence through the use of Web sites, literature and posters. Dreste, in the middle of it all, was implicated in highly coordinated campaigns and conspiracies that the court found to be "true threats" not sheltered by the First Amendment.

The accusations amounted to charges that Dreste had taken part in a conspiracy to threaten the lives of of abortion providers, thus violating the federal ban on disrupting access to abortion clinics. A jury agreed, and a trial resulted in a $109 million judgment against the plaintiffs/ Dreste was found personally liable for $6 million.

Key to the 1999 conviction was Dreste's involvement in producing so-called "Wanted posters," which listed an abortion provider's home and work address, and even offered a cash reward for anyone who successfully persuaded the physician to "turn from his child killing."

During his previous years as an active anti-abortion radical, Dreste's tactics traced a relationship with violence that terrified abortion providers and patients. In 1993, after the murder of Florida abortion provider Dr. David Gunn, Dreste, wearing shotgun shells on his hat, marched to the Hope Clinic in Granite City, Illinois. On his picketing sign Dreste had written: "Do you feel under the Gunn?"


Dreste appears to have largely disappeared from public life since the 1999 conviction. His name briefly popped up in 2012, when, in the midst of Todd Akin's self-destruction over comments about "legitimate rape," it was revealed that Akin had been arrested after a 1987 anti-abortion protest that included Pro-Life Direct Action, a group Dreste would later lead. Akin was also tangentially linked to Dreste's preferred militia outfit, the 1st Missouri Volunteers.

And now, years later, Dreste is preparing to cast his vote for a president-elect whose position on abortion has veered from pro-choice to pro-life and seemingly all points in-between. (Not surprisingly in light of Donald Trump's confusing statements on abortion, Dreste initially endorsed Ted Cruz.)

But when it comes to supporting violence against abortion providers, Dreste's stance appears remarkably unchanged from his years as an active radical. He may not be involved in protesting anymore, but in a recent interview with Politico Magazine, Dreste carefully pivoted around the issue, refusing either to endorse or condemn those who seek to bomb clinics or murder doctors.

“I’m a man of actions. You see my actions. Are there any dead abortionists in St. Louis? No there are not,” Dreste told Politico. “I was a trained United States Marine. If I wanted that to happen, I don’t think I could be stopped. If they think that’s going to happen and they decide not to come into work one day because they see me out front, well OK.”

Just a little reminder: Thanks to the electoral college system, this guy gets to vote for president. You don't. As a Missouri voter, you just got to vote for electors like him.