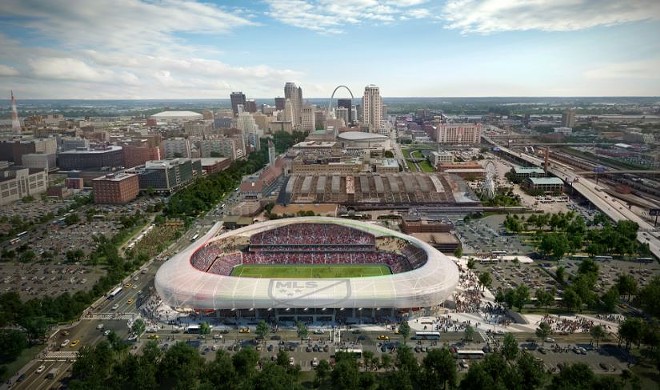 Come April, voters in St. Louis city could be faced with the question of whether to provide an estimated $80 million of a $200 million Major League Soccer stadium immediately west of downtown's Union Station. It's a big ask, especially for a city still paying for the terrible stadium deal it made with the now-Los Angeles Rams.

Announced earlier this month, the stadium proposal was met with a fair amount of skepticism from public officials. The stadium's ownership group, SC STL, insists it's a good deal for the city, and that $80 million is a fair price for taxpayers to chip in for professional soccer in St. Louis.

But what if that $80 million came from private hands? Foundry St. Louis — a rival ownership group whose competing proposal for a Midtown soccer stadium failed to gain traction with MLS — is now throwing its hat back into the ring with an audacious proposition to SC STL: Take our money, and remove public funds from the equation.

"MLS in St. Louis cannot and should not serve as an anchor dragging on City finances and services," wrote Foundry STL CEO Dan Cordes in a November 23 letter addressed to Dave Peacock, a member of the SC STL ownership group and chairman of the St. Louis Sports Commission. "With four principals as City of St. Louis residents, we know the City and its hardships. SC STL, with a group entirely comprised of County residents and out-of town investors, clearly stands to benefit from City influence in its investment, management, and operations."

Cordes' letter, however, appears to be more than a generous business offer. Over the course of six pages, Cordes relentlessly needles at Peacock, who presided over the wrenching (and expensive) attempt to build a new NFL stadium for the Rams.

"I can only imagine your thrill Thursday coupled with anxiety of making such a major announcement," wrote Cordes, a former executive with Express Scripts. "You wanted SC STL’s proposal to be well received, and are excited to finally tell the public about your hard work, despite calls for your resignation from the Sports Commission. But such an announcement also comes with intense scrutiny and criticism."

"Sorry that so few appreciated your proposal," Cordes wrote.

The letter then launches into a page-long chronicle of negative reactions from city officials, including mayoral candidates, who have raised concerns about publicly financing a sports stadium amid the city's other needs.

"We feel it is in the taxpayers' best interest for us to contribute those resources to SC St. Louis, essentially guaranteeing an MLS team and stadium that is privately funded to create a win-win situation for both the league and St. Louis community."

Through a spokesman, SC STL declined to comment on Cordes' letter, which you can read in full below: