Is St. Louis Ready for Another Stadium Debate? Soccer Fans Hope So 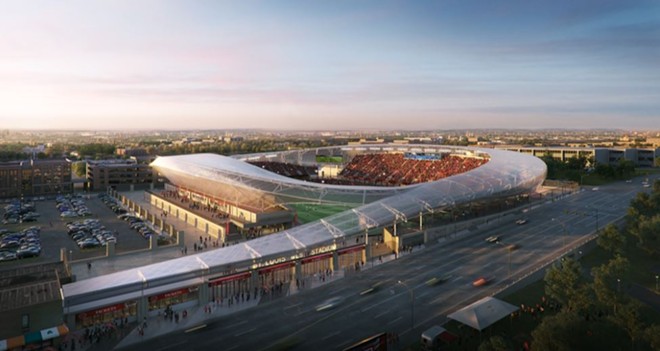 St. Louisans are rightfully suspicious of splashy stadium deals, especially when they involve public funding. It was less than one year ago that city leaders bypassed a public vote in order to placate Rams owner Stan Kroenke with a proposed $1.1 billion riverfront dome and $150 million of city money. The Rams left anyway. Adding insult to injury, the city is still paying down debt on the team's existing dome.

Jim Kavanaugh knows all this. But he's still banking on St. Louis voters to approve funding for around 40 percent of a $200 million stadium that would establish a Major League Soccer team in St. Louis by 2020 or 2021.

"I think it’s very important that you have an investor and ownership group that is committed to the city," says Kavanaugh, the CEO of St. Louis-based World Wide Technology and vice chairman of SC STL, the ownership group which has been working behind the scenes with MLS to move the stadium project forward. The ownership group also includes Dave Peacock, the same former Anheuser-Busch exec who helmed last year's unsuccessful push to keep the Rams in St. Louis.

Unlike Kroenke, says Kavanaugh, the investors and owners attached to the MLS stadium project have no intention of skipping town their team. And SC STL has promised that any public funding must be subject to a vote. City residents could be faced with deciding the fate of a stadium proposal in this April's municipal election, which will also elect a new mayor.

"We want to bring a quality MLS team and organization to St. Louis, but we also want to do it in a way that is good for the community," he says. "People voting on the issue should take that into consideration. If you look at what we’re doing and what we've done, I think they’ll see that we are truly committed."

The SC STL proposal calls for a city-owned, open-air stadium that would sit on 24 acres neighboring Union Station, land currently owned by Missouri Department of Transportation. Designed by HOK, the stadium would boast an opening-day capacity of about 20,000 seats, with the possibility of expanding to 28,500 seats.

However, Alderwoman Megan Green, one of the most vocal critics of last year’s Rams stadium deal, remains a skeptic. She’s waiting to see the numbers before making up her mind, but she hopes the project remains transparent and allows time for independent financial analysis — as well as buy-in from a larger group of taxpayers than just city dwellers.

“My general position stays the same as it was with the Rams stadium,” Green says. “If we’re going to use public bonds for a non-public good, then we need to bring it to a public vote and ensure that we have county participation this time around.”

Green may be happy about SC STL's commitment to a public vote, but county participation doesn’t appear to be forthcoming. In an emailed statement to St. Louis Public Radio, a spokesman for St. Louis County Executive Steve Stenger said "the group’s plan does not include a request for public money from the County for the stadium.”

It remains to be seen if Kavanaugh and his cohorts at SC STL can convince St. Louis that soccer is worth tens of millions of dollars of public money, let alone the mental anguish of going through another stadium drama. But there is one group that is unabashedly excited for an MLS team to put down stakes in St. Louis.

“In two years we went from like 20 idiots to 600 people,” says Morice. “I look around in the stands around me and I see men, women and families, and there’s the singing, the chanting, the smoke bombs, the drums, having a good time. And in three years, we could have a 20,000-seat stadium.”
Follow Danny Wicentowski on Twitter at @D_Towski. E-mail the author at Danny.Wicentowski@RiverfrontTimes.com