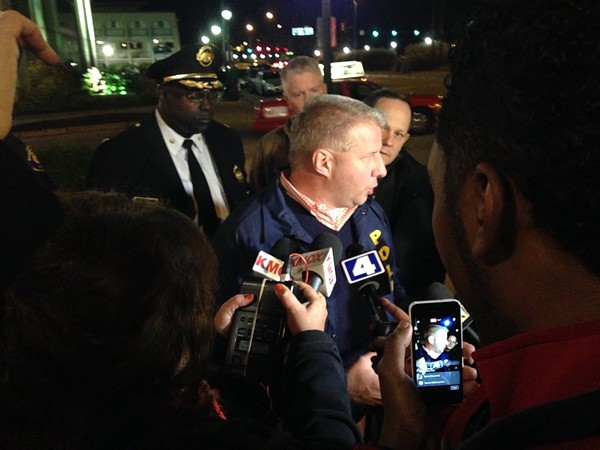 A St. Louis police sergeant was shot twice in the face on Sunday evening in a south city ambush, city leaders say.

The 46-year-old sergeant was patrolling in a marked police Tahoe about 7:30 p.m. when he slowed for traffic on Hampton Avenue near Pernod Avenue, police Chief Sam Dotson told reporters. A silver car pulled alongside him, and the driver opened fire before the sergeant could react, the chief said.

The wounded sergeant was able to call for help on the radio. He was rushed to Barnes Jewish Hospital.

"Fortunately, and for the blessing of God, the officer is going to survive tonight," Dotson said.

Police are still searching for the gunman, who fled after the attack. Cops, who will now be riding two to a car, were scouring the neighborhood late Sunday while helicopters scanned the area from overhead.

"This person has to be stopped," Slay said at Sunday's news conference. "He is dangerous. He will do this again if he's not stopped."

The wounded sergeant was described as a married father of three, who has been with the department for about twenty years. He was conscious and talking, but he couldn't give investigators any description of the suspect and only a vague description of a silver-colored car driven by the shooter. His family had joined him at the hospital.

Dotson said the sergeant was simply patrolling and there was no car stop or engagement before he was shot.

"This officer was not trying to pull this car over," Dotson said. "This officer was driving down the road and was ambushed by an individual who pointed a gun at him from inside his car and shot out the police officer's window."

"He was protecting our streets," Slay said of the sergeant. "He was shot in the face without provocation. He was targeted because he was a police officer."

Police ask anyone with information to call CrimeStoppers at 866-371-TIPS. CrimeStoppers is offering up to $5,000 for tips leading to an arrest.