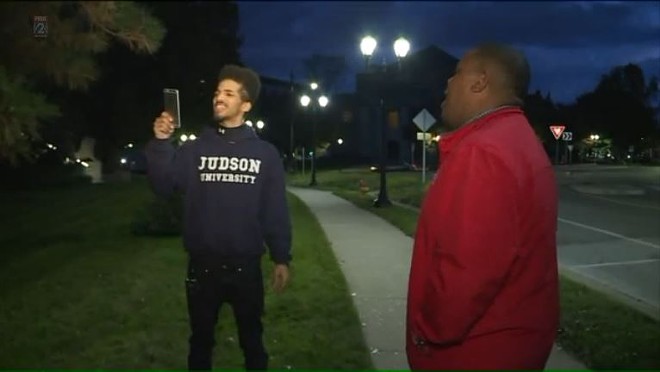 A high school student arrested during a September protest in University City was scheduled to appear in court this week. Deandre Williams, a nineteen-year-old student at Madison Senior High School in Granite City, had been facing municipal charges for disturbing the peace and interfering with an officer — charges Williams planned to dispute.

But on Monday, while standing outside the University City Police Department during an on-camera interview with Fox 2 (Channel 4), the teen received a surprising phone call.

"As we're doing the interview, I was explaining the situation and I got a phone call, and I gave it to my girlfriend," says Williams. "She stopped the interview, and she said, 'That was the police station. They're dropping all the charges.'"

The situation, as Williams put it, began on the evening of September 11. Williams had been eating dinner with his girlfriend and another couple when demonstrators marched into Salt + Smoke, the barbecue restaurant on Delmar. The protesters began calling out racism and chanting, "White silence is violence."

"And all of a sudden, people in the restaurant start chanting with them. They're banging on tables, there's a lot of chaos going on," Williams says. "So I start chanting."

The protests had started earlier that day in the Central West End. They featured a contingent of armed Blank Panthers and public demands for an investigation into the September 6 murder of activist Darren Seals. (Seals' murder remains unsolved.)

The protest in Salt + Smoke was short-lived, and the participants scattered as soon as University City officers showed up. Williams says he followed the protesters exiting the restaurant, filming the action on his phone.

"I was recording a cop, and he said, 'Were you in there?' I was like, 'Yes, sir, I was in there.' And he said, 'Well, you're under arrest.' He slapped the camera down and he arrested me."

The arrest was not a gentle one. Williams was shoved into a nearby planter as bystanders responded with outrage.


During the arrest, Salt + Smoke employees tried to intervene. They told the cops that the teen was a customer, not a protester. But Williams was still arrested and transported to a holding cell, where he was booked and charged. Minutes earlier, police had also arrested longtime activist and Ferguson protester Dhoruba Shakur.

Initially, the police stood by the decision to arrest Williams. University City Interim Police Chief Larry Hampton Jr. told the RFT that the restaurant had asked for his apprehension. "The manager chose to charge him with a peace disturbance," Hampton claimed at the time.

Tom Schmidt, the restaurant's owner, disputed that. "I think there was a misunderstanding by the police," he told us in September. The protest was getting out of hand, he said, and a manager spotted officers outside the restaurant and asked for help. No one called 911. "I don't believe [the manager] was calling for arrests or singling out anyone," Schmidt said.

Two months later, on November 14, Williams agreed to meet with Fox 2 reporter Gerron Jordan to talk about the case and upcoming court date. Williams says that Jordan and a Fox 2 camera crew showed up at the University City Police Department asking questions about the arrest, but the department declined to participate.

And then, during Williams' interview, came the phone call.

"It was the craziest thing," Williams says.

In a statement provided to Fox2, Hampton explained the sudden reversal:

"After checking into this matter I saw that the complainant no longer desired prosecution on the original charges of Peace Disturbance and subsequently all charges were dropped on all persons involved.”

Hampton did not respond to messages left Wednesday requesting clarification on why the charges against Williams were dropped.

"I was literally arrested for nothing," Williams says now. "It really took a toll on me. I was sitting in the car, not being told why I was being charged. The whole time I was thinking, imagine how many other people this happens to."
Follow Danny Wicentowski on Twitter at @D_Towski. E-mail the author at Danny.Wicentowski@RiverfrontTimes.com