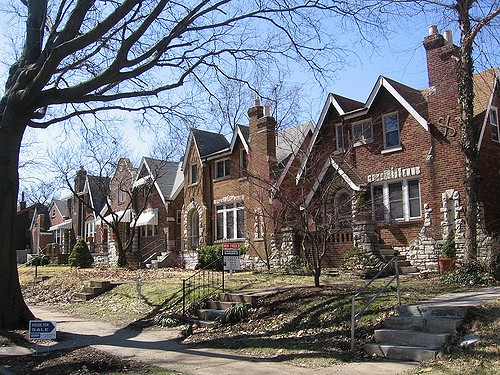 It's been a hard decade for Americans eighteen to 34. Wages have been largely stagnant — and with credit hard to come by and housing costs skyrocketing in many cities, it hasn't been easy to get ahead.

And that's true even in St. Louis. The low cost of home ownership, coupled with inroads in industries like tech, has made St. Louis one of the fastest-growing cities for college graduates under 35, according to no less than the Pew Charitable Trust. Yet the wider picture is a bit less rosy. Not only are millennials leaving the St. Louis metro area at the national average, but millennials' rate of home ownership in greater St. Louis has actually dropped in the last ten years — suggesting that younger residents are not willing (or, perhaps, able) to put down roots.

The data comes from a new study by the website ApartmentList, which looked at 346 metro areas across the cities and used U.S. Census Bureau data to analyze patterns involving millennials.

In surveying all millennials — not just those who graduated from college — the study found that the St. Louis area has actually been losing millennials, with a 9.7 percent decrease from 2005 to 2015. Now, it's worth noting that's only a 1.2 percent decrease if you adjust for the nation's total millennial population, an option the study suggests. But it still puts St. Louis in the middle of the pack, not near the top as in the Pew Charitable Trust study. The St. Louis area's growth in millennial population was 202nd out of 346 metros.

The millennial homeownership rate in the metro area has also dropped, with a 7.4 percent decrease during that same period. That put us solidly in the middle of the pack — 200th out of 346 cities, according to the study.

So where's the good news? As it turns out, there is indeed good news.

Even as St. Louis' millennial homeownership rate has dropped, it's still higher here than in many other cities. In the St. Louis area, 40.2 percent of people ages 18 to 34 own a home — a ranking that puts us in the top-third of the 346 metro areas in the study.

Indeed, of the nation's 30 largest metro areas, only Minneapolis and Detroit do better. And both of those cities suffered bigger losses in the period being surveyed: 10.1 and 13.9 percent losses, respectively.

Incidentally, millennial wages in St. Louis dropped 4.5 percent from 2005 to 2015, according to the ApartmentList study. That puts us in the bottom third of wage growth, but still, many others did even worse.