Beaten bloody in their front yard by a mob, a south St. Louis couple say they can't return home — their attackers are still out there.

"I don't feel safe just going out to the car," Rob Ludwig says.

The 38-year-old says he was sucker punched from behind on September 25 as he tried to protect his girlfriend, Emma, from a crew of roughly fifteen assailants. The couple was punched, kicked and smashed with their own clay flower pots. Blood pooled on the stairs and splattered on the windows of their home.

The brutality of the attack was shocking, even for Gravois Park, where violence is a regular occurrence. Police announced within days they had "strong leads" and had identified a 30-something woman who led the group of teen boys in the assault.

Yet six weeks later, there have been no arrests. Ludwig and Emma say they feel let down by everyone from police to their local alderwoman.

"We're allowing teenagers to terrorize the neighborhood," says 34-year-old Emma, who asked the Riverfront Times to identify her by a nickname.

Emma had lived for ten years in the house in the 3700 block of Virginia Avenue. Since the attack, they've been staying with family as they look for a new place to live outside of the city.

Emma believes police could have stopped the assault before it happened. She says she reported a large group of teens causing problems earlier that day. Later, she says she saw one of the boys harassing a teen girl who lived next door.

The boy, who seemed to be about seventeen, yanked the girl down the steps of her own porch.

"He grabbed her by the thigh, up by her private area, with both hands, and pulled her down four concrete stairs," Emma says.

"Fuck you, you white bitch," he said, according to Emma.

She called the police again. Shortly after, a thin woman — five feet six inches tall, 130 pounds, with long braids and a dark complexion — stormed up to the couple's home. The woman demanded to know why Emma was yelling at her nephew, Emma says.

When Emma went down to meet her, the woman attacked. Police said she used a tree branch, but Emma says it was actually a metal plant stand. The woman cracked her in the forehead.

"That was the first blow," Emma says.

Ludwig, who'd undergone three hernia surgeries just two weeks before, hurried down the walk only to be swarmed by boys, some who appeared to be as young as nine.

"People were pounding on me, beating on me," Ludwig says. "I think I might have blacked out."

Emma couldn't even see Ludwig. The woman and her band of attackers, which now included another adult woman, knocked her down and smashed large, dirt-filled flower pots on the back of her head. Emma was beaten across the back with a broom stick until it broke, she says. Someone grabbed a shard of a pot and sliced her leg just above the knee, opening a wound that would take 36 stitches to close.

The frenzy didn't end until a neighbor shouted that the cops had been called. Then, the attackers scattered.

"The neighbor saved us," Ludwig says. 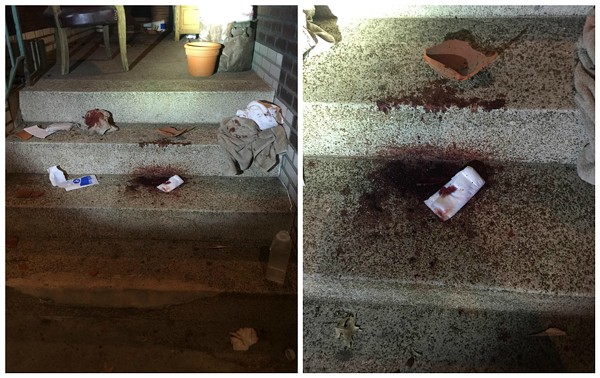 He spent most of the next week in the hospital with a brain bleed. In addition to the more recent hernia surgeries, he'd undergone a kidney transplant two years before. He says he was lucky that his head, and not his mid-section, took the majority of the abuse.

Emma was treated and released from hospital. Photos of the two show the pair covered in blood. In one, Ludwig's eyes are swollen shut, and even his tongue is bruised to a sickening shade of purple.

A police spokeswoman confirmed they had received a call at 6:18 p.m. for "suspects calling the victim foul names." A second call from a neighbor at 6:22 p.m. warned there was an argument on the street. But officers weren't dispatched until after a third call — at 6:27 p.m. — about an assault. Officers arrived at 6:30 p.m.

By that time, Emma and Ludwig were dazed and bloody. Their attackers had fled. They assumed the suspects would be quickly apprehended, because they claim police were provided with addresses and even names for at least a couple of the suspects. A surveillance camera up the block recorded the suspects pass by before the confrontation, although the footage didn't show the actual attack.

As the weeks pass without arrests, Ludwig and Emma have grown frustrated.

The detective assigned to the case told them the woman and seventeen-year-old who started it all had gone on the run, according to Ludwig. When they pressed the detective for updates, the couple says, the officer told them he had a pile of other cases to worry about.

A police spokeswoman tells the RFT that detectives have identified two "people of interest" in the case, and investigators are still working to find them.
The situation is all the more aggravating, because Emma and Ludwig say they were just trying to do the right thing for a neighbor.

"Some people say that's stupid, but that's ingrained in my DNA," Emma says.

Ludwig has finally returned to work, and most of the couple's injuries have healed. But their lives have been drastically altered.

The teens who beat them are scarred too, Emma believes.

"I feel sorry for everyone except the adults in this situation," she says. "I would like that little kid to get his butt kicked, but if he would apologize and he meant it, I would let bygones be bygones."