For some strange reason, America loves relying on nature to predict the future. One obvious example is Groundhog Day. Another lesser-known example is the Bridal Cave Underground Opinion Poll, which predicts the winner of our presidential elections. 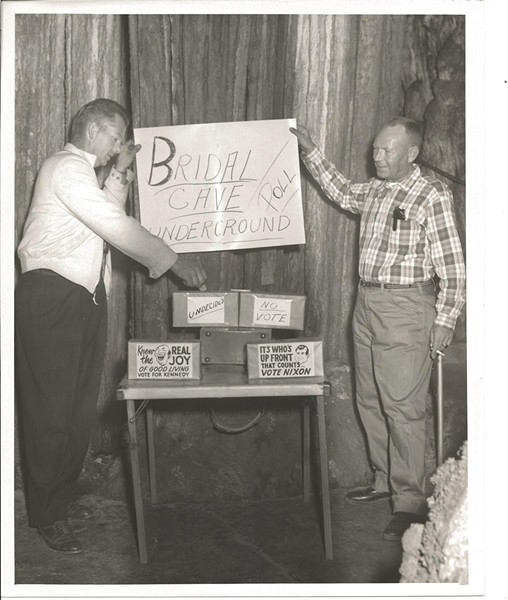 Bridal Cave, located Camdenton, Missouri, sees a wide range of tourists from around the world every year. And since 1960, during presidential election season, every visitor on its cave tours has been polled for their choice for president. Guests use their ticket stub as a ballot — so, hey, no potential for voter fraud! Kids get to vote too.

Here's the thing. Over the years, the poll has only been wrong twice — and it says Donald Trump will be the winner of Election 2016.

That's right. Visitors took part in the 2016 poll on September 30, October 15 and November 1, and Trump won 64 percent of the vote, while Hilary Clinton r

But don't panic just yet. As it turns out, even though the poll takers boast their accuracy, if you ask them which were those two presidential elections they got wrong, they'll 'fess up: The whimsical cave was wrong in our two most recent elections, both 2008 and 2012. Obviously, the Bridal Cave Underground Opinion Poll did not see Barack Obama coming.

On the other hand, that's only twice in 56 years. The poll even named the exact percentage of the popular vote in 1972.

So have the odds tipped in Trump's favor? Or is the Bridal Cave Underground Opinion Poll an inaccurate indicator that needs to retire?

We're hoping for the latter.