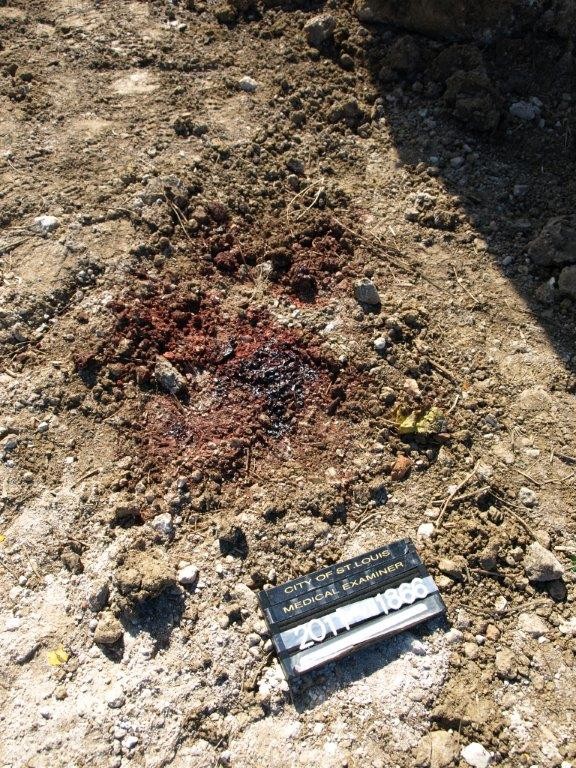 It was one of the more curious developments in a case that has had many twists and turns: Photos obtained by the widow of Bob Cassilly this summer show what appears to be a bloody patch, and a rock, near the bulldozer where his body was found.

The founder of the City Museum, Cassilly died five years ago in what the St. Louis medical examiner quickly labeled a bulldozer accident. But his widow Giovanna has been seeking to persuade authorities to reopen the case, arguing that a cursory investigation on the part of law enforcement missed clear evidence that he was murdered. A medical expert hired by her attorney, Albert Watkins, issued a report last month arguing that the noted sculptor was actually beaten to death.

Giovanna Cassilly and Watkins have focused on two evidence photos they were finally given by the medical examiner's office this summer — suggesting they provide important clues.

Taken at Cementland, the former cement plant that Cassilly was transforming into his masterpiece, the photos show a patch of ground just feet from Cassilly's bulldozer. In one close-up photo, seen above, a marker suggests that the blood or another red-hued substance on the ground was being treated as evidence. A second photo — a cropped version of which appears below — shows the area's proximity to the death scene, and what appears to be a rock.

But proving that the photo shows something important just got a whole lot more difficult. Watkins says he recently learned that the police had failed to preserve any evidence from the rock or the red-stained ground nearby.

"They won't admit to us whether they collected it and threw it away, or whether they never collected it in the first place," he says. And the rock itself is no longer in evidence, if it ever was — "effectively botching any DNA element of the investigation," Watkins says.

The St. Louis Metropolitan Police Department, which handled the investigation, said it was aware of the photos, and had them in its possession. A police spokesman said that questions about what evidence was obtained, and whether or not it was preserved, should go to the Medical Examiner's Office.

But a spokesman for the Medical Examiner's Office said that it was responsible only for the body of the deceased, not any other evidence at the scene.

Watkins says he can only guess why soil samples were not taken or preserved: "It was one of two things — either complete ineptitude at levels never before seen, or a coverup." He adds, "I prefer to embrace the 'draconian ineptitude' explanation."

As for Giovanna Cassilly, she expressed frustration with the numerous missing pieces in the investigation. The police previously defended by their work by saying that OSHA and the Medical Examiner's Office were also involved, but those two investigations were so cursory, records show they never established when Cassilly was last seen alive, much less who had access to Cementland on the weekend of his death.

Giovanna Cassilly notes that she was never even contacted for information. "They failed to call me," she says. "They failed to question me or identify where he was last seen. They failed to find out if anyone else was working in Cementland that weekend." She only learned of the bloody patch of earth five years after her husband's death, and to learn that no evidence has been preserved from it has been a bitter pill. "That is Crime Scene 101," she says.

But Cassilly points out that she still has one big piece of evidence in her possession — the bulldozer her husband was found in after his death. She believes that, despite the medical examiner's original theory, analysis will show that the bulldozer never rolled over, much less tumbled down the hillside at Cementland to land nearly upright.

"I do have evidence — I have a bulldozer that never flipped," she says.

Editor's note: This story was updated one hour after publication to include additional information from the Medical Examiner's Office.