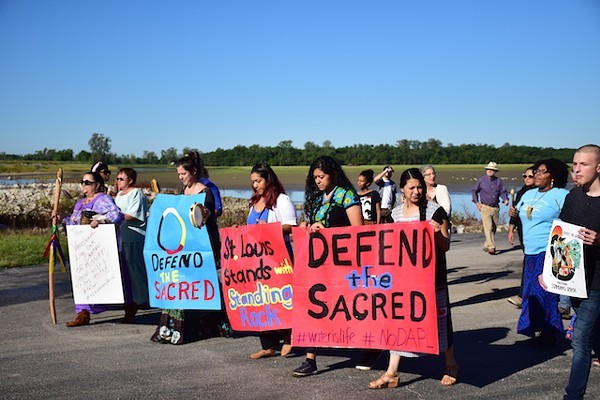 You've scanned the #NoDAPL updates on Twitter. You may have even checked into Standing Rock on Facebook in hopes of confusing law enforcement.

If you're now ready to take the "armchair" out of your activism, you won't need to drive all the way to North Dakota to inveigh against the Dakota Access Pipeline project. This weekend, the protest is coming to you.

The pipeline is a $3.7 billion pipe that would run 1,172 miles from North Dakota to Illinois, transporting approximately 470,000 barrels of oil per day. The route crosses the Missouri River in North Dakota, as well as Lake Oahe, the reservation’s main source of drinking water. That's led to concerns locally that Missouri water quality could be affected.

And so beginning at 4 p.m. on Saturday, November 5, people concerned about the pipeline will gather at Union Station. A march is planned beginning at 5 p.m., with the final destination KSDK's building in downtown St. Louis. There, the protesters aim to hold a peaceful rally — or, in the words of organizers, a "solution rally."

Matt Durney is a co-founder of the Patchwork Hearts Collective, a St. Louis-based arts collective that seeks to raise awareness of social and environmental issues and that is one of the organizers of Saturday's protest. He's protested at Standing Rock as well as Mississippi Stand, in Keokuk, Iowa, and has deep concerns about the project.

Durney says the "solution rally" is focused on the big picture — alternative energy sources and "breaking away from the fossil fuel industry." "We have the technology to go other ways," he says. "This industry is destroying our planet."

Durney says he and fellow activists welcome the social media buzz surrounding the Dakota Access Pipeline cause in recent days. "I was a Facebook activist for awhile," he says. "When people feel it in their heart, that's when they're ready to act."

For more information about the protest Saturday — as well as one planned for November 23 — see Patchwork Hearts Collective's Facebook event page.