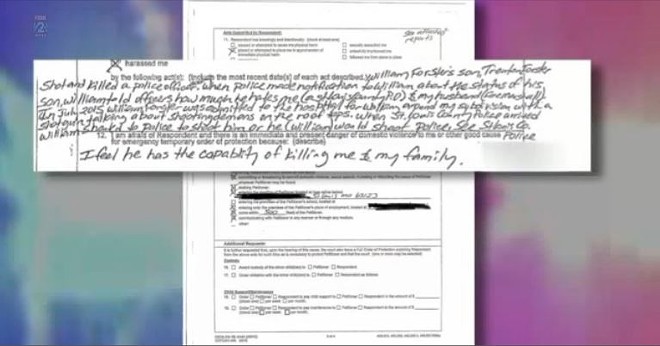 Soon after the "point blank" murder of a St. Louis County police officer on October 6, a fellow St. Louis county officer filed a restraining order against the suspected killer's father.

The petition claims that William Forster — whose son, Trenton, is charged with first-degree murder in the shooting of Blake Snyder — had a long history of run-ins with police, including an incident last year that involved an armed confrontation with officers.

According to the petition, when officers notified Forster of his son's arrest on October 6, they were met with a hail of verbal abuse directed at Forster's neighbors, a St. Louis County officer and her husband, a fire marshal. The petition goes on to claim that, in July 2015, Forster was admitted to a hospital after an apparent mental break.

Forster was "walking around my subdivision with a shotgun talking about shooting demons on the rooftops," states the petition.

"When St. Louis county police arrived, William shouted to police to shoot him or he (William) would shoot police," the petition continues. "I feel he has the capability of killing me & my family."

So far, the various local media outlets which obtained the records have chosen not to name the St. Louis County officer who filed the October 6 petition.

A second petition for a restraining order, filed October 7 by the officer's husband — the aforementioned fire marshal, who is also not named in media reports — contains further details on what appears to be a volatile relationship between William Forster, his son and law enforcement.

“My wife and I have witnessed his son dealing drugs in our subdivision and have alerted his and his wife per their request,” the document states, according the St. Louis Post-Dispatch. “He knows that my wife is a police officer and that I am a fire marshal and has asserted to others that we are responsible for the repeated interactions he and his sons have had with the police.”

The second petition also claims that Forster “has sent threatening messages to my wife and tried to interact with our children after we asked him to leave us alone.”

A St. Louis County Circuit Court judge granted the restraining orders against Forster on October 17, effective until July 17. In an interview with the Post-Dispatch, Forster maintained that his troubled family history is irrelevant next to the anguish experienced by the family of Officer Blake Snyder, the policeman allegedly murdered by his son.

“What’s going on with my family is not important here," Forster told the newspaper. "What’s important is that the right things are being done for the officer’s family.”

It's worth pointing out that none of the details included in the restraining orders led to criminal charges. KTVI (Channel 2) reports that although police confiscated four guns from William Forster after the July 2015 incident, the firearms were later returned.

In a police report obtained by the TV station, Forster's wife told police that her husband had never been diagnosed with mental illness, but that he had been struggling with stress related to his sons and the death of his father, leading him to drink too much on the night of July 4.

Snyder's brutal murder shocked St. Louis and the local law enforcement community earlier this month. A four-year veteran of the department and a married father with a two-year-old son, Snyder was the first St. Louis County Police Department officer killed in the line of duty since 2000.

Snyder had been responding to a report of a disturbance in Green Park on October 6 when he spotted eighteen-year-old Trenton Forster heading to his car. Snyder reportedly asked Forster to show him his hands.

"The suspect produced a pistol and shot Officer Snyder point blank," St. Louis County Police Chief Jon Belmar said during a news conference after the shooting. "It was an immediately fatal wound."

A backup officer returned fire, hitting Trenton Forster multiple times and leaving the teen critically wounded. The accused cop killer remains in custody on a $1 million dollar bond. He has pleaded not guilty.

In a statement provided to KMOV (Channel 4), Snyder’s sister-in-law Shannon Hoerle appeared to link William Forster's actions with his son's.

"As a family, our hearts are heavy to hear this new information come to light. But just as love breeds love, hate also breeds hate."