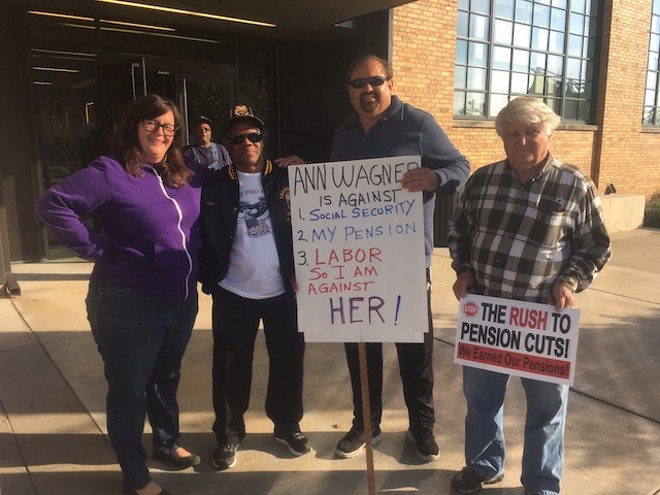 Incumbent Congresswoman Ann Wagner (R-St. Louis) was supposed to make a rare public appearance in St. Louis yesterday afternoon. But the event was canceled, apparently over Wagner's reluctance to confront a few protestors.

Meghan Burris, communications director for Wagner, said in an email only that the event was canceled by the Women’s Policy Network. “We hope the event will be rescheduled for November,” she wrote.

But Alison Dreith, the executive director of NARAL Pro-Choice Missouri, thinks she knows why. Dreith and a few other members of her organization planned to protest outside the event, taking Wagner, a Republican, to task for her anti-abortion policies.

“I thought this would be the perfect opportunity to hold Ann Wagner accountable,” Dreith says.

Then she got a call from a representative of the Women’s Policy Network. The woman on the phone asked her to call off NARAL’s protest because, she said, the event would have to be cancelled otherwise.

Dreith tried to explain that she had a right to protest, but the network representative, whose full name she doesn’t know, wasn’t having it.

“She said, ‘You should be happy because you’re about to get a president and a bunch of Supreme Court justices’,” Dreith says. “I said, ‘That’s really insulting.’”

Dreith says her protest wouldn’t have been disruptive — “We were just going to stand outside and hold signs,” she says. Still, she didn’t want the Women’s Policy Network to have to cancel an event, so she made some calls to see if anyone else was planning a protest.

As it turned out, the Teamsters were, and they had already recruited around 100 people — it was too late to call it off.

“I guess Labor has a problem with Representative Wagner as well,” Dreith says.

But when she called back to tell the Women’s Policy Network that protesters would definitely be in attendance, she was told the event had already been cancelled.

Dreith says she wasn’t told outright that Wagner was the one who called off the event, but she spoke to Nicole Galloway, the other planned speaker, who had no problem with protesters attending.

The campaign of Wagner’s major opponent in the race, Democrat Bill Otto, also sent out a press release blaming Wagner, and blasting her for her actions.

“Today the Bill Otto for Congress campaign got several calls from Missouri women complaining that longtime incumbent politician Congresswoman Ann Wagner had used her office to threaten the Women’s Policy Network of Missouri and the St. Louis Regional Chamber that if protesters were allowed in front of an event, she would not attend,” the email reads.

Jennifer Smith, a spokeswoman for Otto’s campaign, confirmed that the campaign was told the event was cancelled upon Wagner’s request.

Dreith said she wasn’t too surprised by the congresswoman’s actions. She’d planned the protest for the event in the first place because it was her only chance to catch Wagner in public; even though she’s running for reelection, Wagner hasn’t made any such appearances in St. Louis since the start of her 2016 campaign, Dreith says. She even skipped a debate held by the League of Women Voters that all three of her opponents attended.

It also didn’t surprise Dreith that Wagner, who was until recently a Donald Trump supporter, didn’t want to confront women’s issues.

“We need to be doing a better job of protecting women and listening to women,” Dreith says. “That was a failure today.”