Stanford Will Give a Free Ride to Students Willing to (Gasp!) Return to the Midwest 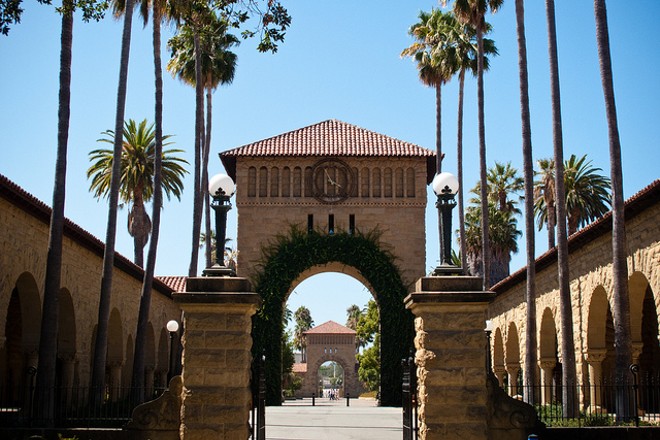 Hey college students — would you like to get an MBA from one of the top universities in the country? Do you need some financial help to pay the exorbitant tuition? Are you willing to drag yourself away from the land of In-N-Out Burger and spend a few years “investing” in flyover country? Then boy, does Stanford University have a deal for you.

The California university's School of Business, home to the nation’s largest population of students who want to start “Uber, but for…” companies, is offering three students full tuition plus fees — an offer valued at $160,000 — if only they’ll agree to spend at least two years working in the Midwest shortly after graduating.

According to Stanford, the Midwest — which in their definition includes Missouri as well as Illinois, Indiana, Iowa, Kansas, Michigan, Minnesota, Nebraska, North Dakota, Ohio, South Dakota, and Wisconsin — is “underrepresented” and in need of “economic development." Hence a fellowship targeting people with "strong Midwest ties." One way to prove your ties? Show you went to high school here.

And so in its inaugural year, the project hopes to find students from the Midwest, give them a great business education at Stanford, and then send them back home to use what they’ve learned, with the goal of creating a “Silicon Prairie” right here in the heartland.

Still. While the region’s got its share of problems, Stanford does a great job of making a dozen diverse states sound like they might be experiencing a famine or a civil war.

And if Silicon Valley wants to expand its reach nationwide, let’s hope its problems, among them an army of stressed, depressed, caffeine-addicted techies, aren’t coming with it. Moreover, cities like St. Louis are already struggling enough with the economic disruption of California-based companies like Uber. We don’t need the Valley’s vicious anti-union crusades to become normalized here; we have Republicans for that.

Stanford clearly has good intentions. But it’s hard not to imagine its bright-eyed grads running for the coast when they realize they can’t replace cornfields with a technology utopia in just two years.

And hey, if you really want to invest in the region? We do have colleges here in the Midwest. Try getting your MBA there. It won't even cost $160,000 to do it.