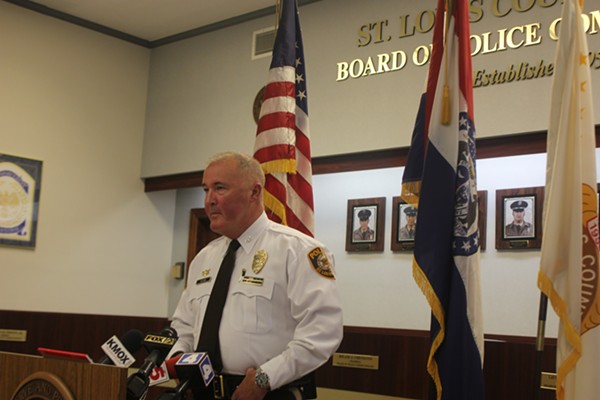 Late on the night of October 20, as a St. Louis County police cruiser carted a bloodied officer to the hospital, news of his shooting swept across the department.

Police Chief Jon Belmar visited the hospital that night, checking on his wounded officer and speaking to the other cops who'd gathered there. In the hours that followed, he would talk to more police from the shooting scene and let them know the officer would be alright, despite the bullet holes.

It wasn't fear or even anger that the chief noted in their reaction.

"There was just an overwhelming sense of relief," Belmar said later at a news conference.

All things considered, the shooting could have been far worse, as the police officers were well aware.

They had buried Officer Blake Snyder just a week before. The married father of a two-year-old was shot dead on October 6 while responding to disturbance call in south county. Thousands of people, including law enforcement officers from across the nation, had attended the funeral.

Blue lights still lit the county police headquarters in Snyder's honor on the night of the latest shooting, which happened about 10:40 p.m. on Thursday.

Overall, policing in the United States has become a much safer job in the past four decades. The number of officers fatally shot each year rises and falls but has generally decreased since the 1970s. Last year was particularly good. A total of just 41 officers were "feloniously" killed, according to FBI statistics. Compare that the 1970s and 1980s when the FBI's annual tallies averaged more than 100.

But the killings have spiked in the first half of this year. Thirty-two officers were shot to death by July 20, according to the National Law Enforcement Officers Memorial Fund, a nonprofit that tracks line-of-duty deaths. During the same period in 2015, a total of eighteen officers were fatally shot.

This year's slayings include ambush-style attacks that killed five officers in Dallas and three in Baton Rouge within two weeks in July. The same month, Ballwin Police Officer Mike Flamion was shot in the neck during a traffic stop in the quiet south county suburb.

Flamion survived but was paralyzed. The Gary Sinise Foundation announced plans last week to build him a high-tech "smart house" to accommodate the challenges of his new life.

Belmar said the October 20 attack on one of his officers began when they knocked on the door of a house in Castle Point, looking for a suspect in a previous shooting. The suspect slipped out of a side entrance, squeezed off multiple rounds and ducked backed inside, authorities said.

The wounded officer was hit in the left arm. He had what's called a through-and-through hole along with an entrance wound in another part of his arm. Doctors aren't sure if they'll remove the bullet, and Belmar said it's not clear how many times he was hit.

The suspect, 28-year-old Jo'Von Mitchell, was eventually taken into custody after an hours-long standoff.

So far, Belmar said, the recent shootings seem to have only deepened the resolve of his officers.

"I don't see a lot of frustration out there," he said. "There's not a lot of shoulders down or anything like that."

Asked what he would tell them, he said it probably wouldn't be much.

"You talk to officers about the fact that they're among the very best," he said. "Their job is worth doing. This community is worth protecting. What they do has importance. It has value and, by the way, they know that, and they really don't have to be told that."