After thirteen years in operation, the St. Louis Metropolitan Taxicab Commission (MTC) will finally get its first female member.

That member is Catherine Gilbert, 25, who hopes 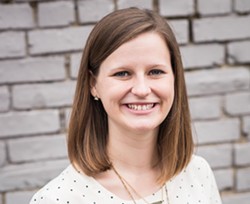 that in addition to adding a female voice, she can help the MTC adjust to the Uber era.

“I was asked to join the Metro Taxicab Commission because I’m a young, tech-savvy woman who can bring a new perspective,” Gilbert says.


What Gilbert might not share with the MTC’s other eight members, which include four taxi company owners, is a familiarity with and fondness for the ridesharing service Uber. Gilbert uses the app herself.

Uber, which allows anyone to become a driver or hail a ride through its app, has drawn controversy for its comparatively lax background checks of drivers and aggressive moves to defy regulators. The service is still operating in St. Louis, despite a battle in federal court over the taxi commission’s efforts to keep them out.

“It’s a new frontier for [the MTC],” Gilbert says. “When the Taxicab Commission started, there was no Uber. There were no apps.”

Gilbert says while she can’t comment directly on what the MTC should be doing to address the arrival of Uber and other app-based ridesharing services in St. Louis, she thinks the city’s limited public transportation options disproportionately affect low-income people and adding more options for St. Louisans will be a positive thing.

“I’m always in favor of more transportation options,” she says.

Gilbert is the director of engagement at Elements Partnership, a business consulting company, but she also has a background in urban planning and helped found the Greater Gravois Initiative, “a grassroots movement bringing together neighbors, businesses, and leaders to improve walkability, bikeability, and transit access on Gravois.”

Gilbert’s appointment is a product of the Women’s Foundation’s Appointment Project, which has partnered with St. Louis Mayor Francis Slay to address the gender disparity in political appointments.

“They have done a variety of research, and one they did a couple of years ago was about women and their civic involvement,” says Mindy Mazur, a spokeswoman for the Women’s Foundation.

The Appointment Project tries to overcome women’s reluctance to pursue political positions by recruiting talented women and partnering with city and state governments to encourage them to appoint more women.

“There’s tons of boards in St. Louis that women have not served on,” Gilbert says. “I think we’re starting to see that change and to see some representation.”