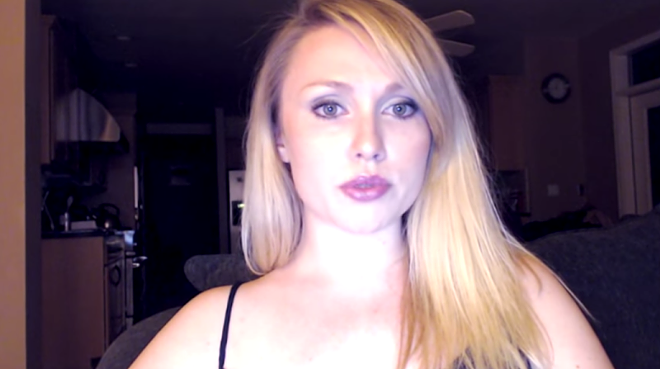 "Hey guys! So I grew up in the suburbs of St. Louis, about ten or twenty miles from Ferguson, but I don't think I've ever actually been to Ferguson, even though I lived in St. Louis for around fifteen years. And that's because St. Louis, outside of the suburbs, is basically an uninhabitable hellhole ruled by roaming gangs of black criminals that commit violent crime indiscriminately. The rest of the areas are just abandoned post-apocalyptic wastelands."

So begins the off-the-charts insane ramblings of a Seattle-based conservative YouTube "star" who goes by "Blonde in the Belly of the Beast" — an off-brand Tomi Lahren wannabe who somehow has found a way to be even more offensive than her Glenn Beck-approved inspiration — in a recent video titled "St. Louis: Why I didn't Bother Trying to Improve my Hometown."

Let's unpack, shall we? First off, Rebecca — her name is Rebecca, last name unknown/intentionally concealed, but this YouTube video/podcast in which she is interviewed, titled "You're All Faggots," helpfully uses her first name — Ferguson is a St. Louis suburb, you idiot. To say you have never visited Ferguson because St. Louis is an "uninhabitable hellhole" and only the suburbs are safe is complete, utter, abject nonsense. Like, by definition. The rest of that verbal diarrhea is just standard racist bullshit, but your Ferguson thesis is straight-up incomprehensible bullshit.

It just gets worse from there.

"It's one of those cities that has extremely wealthy and predominantly white and Asian suburbs," she continues. "In most of the St. Louis suburbs the cost of living is still relatively low and the schools are good and there's very little crime. And that was the case in the suburb that I grew up in, and most of us had kind of a loose relationship with the actual city outside of the occasional baseball game or when we were teenagers going out in some of the safer neighborhoods."

Got it! So you grew up in St. Charles County, right Becky? Can we call you Becky? Or Chesterfield, or south county? You never really went to the city itself except for baseball games, but here you are to provide your expert analysis on the place. Fucking great. You are the comment section of every St. Louis-area news story come to life.

Becky with the Blonde Hair goes on to rattle off a list of crimes that have occurred in St. Louis in recent years — terrible crimes, indeed, including the late-September beating of a south-city couple by a group of fifteen teens. She laments that "it got almost no mainstream media coverage" while simultaneously linking to a Fox 2 News story about the attack in the description of her own video. Again, because she is stupid.

"Racially motivated black-on-white crime happens all the time in St. Louis, and rarely, if ever, is the opposite true," Becky pulls out of thin fucking air before displaying some spurious stats onscreen attributed to a race-obsessed website calling itself American Renaissance. (Among its many racist claims: "One of the most destructive myths of modern times is that people of all races have the same average intelligence.")

"This was a national study that pre-dates Ferguson so I would venture to say that St. Louis is even worse than this national statistic, as black crime — especially racially motivated against whites — seems to have really exploded in St. Louis since that incident."

So, old statistics from a pro-eugenics group (one listed as an extremist hate group by the Southern Poverty Law Center) that you, Becky, have run through the very scientific filter of "I would venture to say." You dipshit.

"My school district bussed in kids from the worst areas of St. Louis city and placed them in the whitest, wealthiest and best schools perhaps in the entire state. As kids we didn't really understand racial and socio-economic differences. The differences that I noticed instead were the associated values of my inner-city peers — they were often from broken homes, they were interested in crime, disinterested in academics, they were highly sexualized from an extremely young age."

It gets even worse. Some highlights:

- "Their parents didn't care about academics or about raising their own children so putting these kids in public schools with rich white and Asian kids just really magnified their differences even more. Few inner-city students cared to take advantage of this unprecedented educational opportunity afforded to them by the very generous white community."

- "I swear to God I don't think I have ever seen a legitimate white on black instance of racism growing up in St. Louis or at Mizzou. We all had black friends and everything was fine."

- "My friend was successful because her black family moved her out of a black neighborhood and taught her to adopt the values of the white community."

Becky, the conclusion I've come to is this — and it's about a million times more well-researched and authoritatively documented than the crap in your video:

You are a deluded moron who aspires to be a professional deluded moron. You can't even put your name on your work because deep down, you know it is wrong. You are intellectual rot wearing lipstick. You are social cancer with a modest Twitter following.

Speaking of Twitter, just for fun, I'm just going to share with the world what it is you were up to on social media as I was writing this post:

Feminist next door is moving out with her painting of the noble savage pic.twitter.com/rac88dcRKs

Thank you, sincerely, for leaving my hometown. You improved it without even trying. To Seattle, we are most sincerely sorry.

Watch this lady's stupid bullshit video below, if you can stomach it.