The web headline of the editorial in the St. Louis Post-Dispatch on October 5 said it all: "Give nonprofits an edge in bids to run state license offices."

There was just one problem.

The state of Missouri already does exactly what the editorial called for it to do. 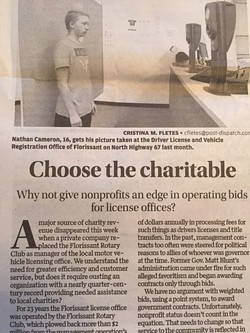 The unsigned ed, presumably signed off by a majority of the members of the daily's editorial board, came after a feature in the paper about a changing of the guard in Florissant. For 23 years, the motor vehicle licensing office was run by the Florissant Rotary Club. On Monday, it got a new operator, a privately owned company called Elle Management.

The editorial reported, accurately, that Elle Management had earned extra points for being a woman-owned business and for committing to extend operating hours and add staffing. All good things, right?

But then came the whopper:


The bidding process doesn't award points for being a nonprofit, which put the Rotary Club at a disadvantage. Instead of hiring more staffers to address long lines at the license office, Rotary apparently opted to save money so it could route a greater percentage of proceeds to civic groups such as food pantries or organizations that employ people with developmental disabilities. Mayor Thomas Schneider, who fought for the club to keep the contract, called the transfer 'shameful,' the Post-Dispatch's Steve Giegerich reported.

But as the paper has since acknowledged in a correction, the state does in fact award points to non-profits — up to 18 points, in fact. That's eight more than the points awarded to minority or women-owned businesses.

The Rotary was awarded all eighteen of those points, but it still got beat, according to a memo sent to the Post-Dispatch by a (conceivably annoyed) John Mollenkamp, the acting director of the Missouri Department of Revenue.
Demanding a correction, Mollenkamp called the paper's mistake "an egregious error."

What Mollenkamp didn't delve into is the bigger picture: Namely, that the changeover in Florissant is one the paper ought to be applauding.

As Giegerich's original story reported — but the editorial did not — Rotary's lost contract was rooted in a 2009 policy decision by Governor Jay Nixon to stop the politicization of such contracts. As such, the Rotary had to compete on an objective scale — not just rely on allies supporting their cause like (presumably) Mayor Schneider.
And once the nonprofit was forced to compete, it wasn't even close. As Mollenkamp pointed out in his letter, the Rotary finished last of the five bidders.  But while a summary evaluation of the bids was available online, the Post-Dispatch editorial writer missed it. Instead, the original editorial sniffed, "Maybe there would be more [nonprofits running license offices] if the point system was altered to reflect the value of the services they provide and their effort to help to communities thrive." Or maybe, even with that boost, they'd still lose.

Weirdly, even though the P-D issued a correction in response to Mollenkamp's memo, the editorial still stands, largely unchanged. Sure, the language has been tweaked to make it clear that nonprofits get points after all, but there's still the original headline suggesting nonprofits need an "edge" and Mayor Schneider weighing in on the shame of it all.

And really, since nonprofits do get an edge, the paper is left with the flimsiest of arguments — the idea that, objective measures be damned, we ought to let the good old boys network keep running the state motor vehicle office in Florissant. Never mind that women or minority-owned companies might do a better job, and never mind if customers are inconvenienced.

"Our heart is with the Rotary Club," the paper concludes. We're sure the people who waited in line for drivers' licenses or spent lunch hours rushing to complete paperwork during the office's too-short hours are sincerely touched by the sentiment.