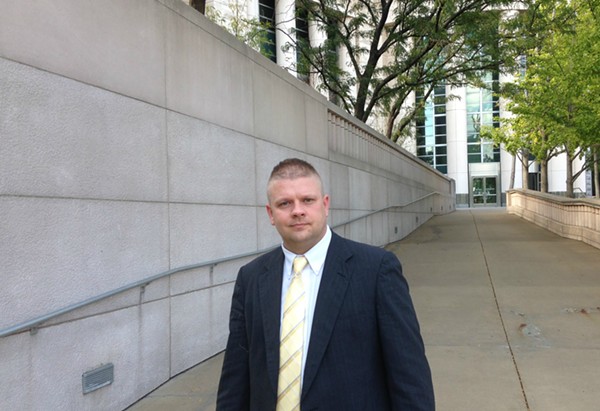 Corrupt ex-cop Steven Blakeney got to take a trip down memory lane on Wednesday.

A young college student, a minister and a fellow officer described their nightmare interactions with the former Pine Lawn lieutenant during the first day of his sentencing hearing in federal court.

Blakeney, who was convicted in January for his role in a bogus arrest, sat just a few yards away, saying nothing as the witnesses accused him of harassing, threatening and, in the case of the minister, physically assaulting people under the guise of police work.

Lawson served on the Pine Lawn force for three years with Blakeney. He testified about a day in July 2013 when the hulking 36-year-old ordered him to gather all the city's officers and stage along I-70. Blakeney claimed he was following an armed drug runner.

"Get everyone together," Blakeney reportedly told him on the phone. "I'm coming through town."

They did as they were told, pulling over a Jaguar shortly after it passed into Pine Lawn's jurisdiction. Lawson, gun drawn, ordered the driver out of the car, cuffed him and patted him down. Within moments, Blakeney came jogging up.

"Where's the tough guy?" he shouted.

The driver was Anthony Telano, an Army vet and minister who had been driving home to St. Charles from a Cardinals game. He testified he had been in bumper-to-bumper traffic a bit earlier when he was startled by a bright light. For a second, he thought he was about to be T-boned. He soon realized it wasn't headlights he'd seen, but a spotlight mounted on what looked like a decommissioned patrol car or maybe a taxi.

The car passed him, and Telano flashed his lights, he later told investigators. He'd forgotten all about the brief run-in when he was pulled over miles later and ordered out of his car by Lawson.

Telano, who was once a police officer in Louisiana, says he his hands were already cuffed behind his back when a raging Blakeney rushed up to him and drove a knee into his right thigh. Blakeney, who was a sergeant at the time, cinched the handcuffs up tight, lifted the 240-pounder off the ground and slammed him onto the hood of a car.

"My shoes flew off," Telano said in court.

Lawson testified he saw Blakeney hit Telano in the back of the head with his forearm and throw him over his hip into a ditch. Officers then tore apart the Jaguar in search of the gun or drugs, which Blakeney claimed he'd seen.

"Nothing turned up," Lawson said. "All we found was a bunch of air fresheners that hadn't even been opened."

Lawson says he and another Pine Lawn officer later told Telano he should contact a larger agency, possibly the FBI, and tell them what happened. Lawson himself was afraid of retaliation, since Blakeney outranked him.

"We needed him to go to somebody who could get this fixed so it wouldn't happen to anyone else," Lawson said.

Telano, who also works for the National Geospatial-Intelligence Agency, was jailed for several hours on a variety of traffic citations. He later sued Pine Lawn and eventually agreed to a settlement.

Prosecutors, former co-workers and victims claim Blakeney's actions that night were part of a pattern of abusive policing. He's facing a civil lawsuit brought by two women, one a St. Charles police officer, who claim he drugged them at a bar and then had a junior officer escort all of them to another bar and then to Blakeney's home, where they awoke terrified and confused in the morning.

In the case at hand, he strong-armed a convenience store clerk into falsely reporting a mayoral candidate had stolen campaign signs. Blakeley then arrested the candidate on the bogus charge.

On Wednesday, 24-year-old Jordan Martner testified Blakeney pulled her over at 1 a.m. in April 2014, accused her of trafficking drugs and threatened to dump her "in the ghetto," where he said a white woman like her would be in trouble.

Martner, who was 21 at the time, testified she was on her way to her boyfriend's home from college in Columbia. She admits she was speeding by about ten or fifteen miles per hour but says she committed no other violations.

Blakeney cussed her and tore apart her car, dumping out luggage from her trunk and cracking the screen of her laptop, she said. When Martner's worried boyfriend started calling repeatedly, she claims Blakeney took her phone, pushed her thumb down on the sensor to unlock it and texted the boyfriend, pretending to be her.

Assistant U.S. Attorney Reginald Harris asked Martner, "Wasn't it kind of creepy that the police officer is texting your boyfriend?"

The sentencing hearing is scheduled to wrap up Thursday. Blakeney's attorney, Matthew Radefeld, told the judge he was still trying to decide whether he would call any witnesses.